3 Australian Billionaire Spends Plenty of Time on Board His Superyacht, a Luxury Powerhouse

In this age of technology and ever-present cameras, it seems impossible to fly under the radar – even more so when you’re one half of one of the industry’s most powerful couples. But money can buy anything, including privacy, in a world that has long forgotten the meaning of the word.

Eos is one of the world’s largest and most famous sailing yachts and a record-breaker until the 2017 arrival of Oceanco’s Black Pearl, a stunning sailing masterpiece that is believed to have inspired the construction of the future record-breaker, Jeff Bezos’ Y721. Whenever Eos makes an appearance in public, much like a superstar, it draws attention and makes headlines, yet, for all this, it remains an enigma.

Here is an attempt to lift the veil as much as possible on this enigma, a $200 million vessel that is said to be the epitome of luxury, elegance and, not in the least important, outstanding design. After all, you don’t become an icon (enigma or not) by conforming to standards.

Eos is named after the Greek goddess of dawn, the daughter of titans Hyperion and Theia, and sister of the sun god and the moon goddess. Eos is a sailing yacht, a three-mast Bermuda-rigged schooner that relies on a couple of MTU 4000-series engines for outstanding performance, regardless of the wind conditions. At full throttle, Eos can hit top speeds of 16 knots (18 mph / 29.5 kph).

Built by luxury shipyard Lurssen on a Lurssen naval architecture, an exterior design by Bill Langan, and interiors by Francois Catroux, Eos was delivered in 2006, after a three-year construction phase. Since delivery, it has had one single owner and he’s been keeping it a secret on purpose, as it serves as the family yacht.

That owner is billionaire media mogul Barry Diller, known as “Diller killer” in the industry because of his exceptional negotiation skills. He is married to fashion designer (and icon in her own right) Diane von Furstenberg, who is often erroneously referred to as the owner. Together, the two have an estimated net worth of $5.2 billion as of 2022, which means that, yes, they can definitely afford a $200 million vessel, as well as keep it a secret from the public by not chartering it.

At 93 meters (305 feet) in total length, Eos is among the top 5% yachts in the world by LOA. The fact that it’s a sailing vessel would have been enough to draw all eyes to it at port, but the three 61-meter (200-foot) masts make it an unforgettable sight, as does the deep dark blue hull. Eos has a teak deck, an aluminum hull, and aluminum superstructure. Much of the superstructure was repaired after an extensive fire in 2012, when the ship was at harbor while Diller and von Furstenberg were visiting ashore.

A later refit program, throughout 2018 and 2019, was even more extensive: the Rodal rigs were removed, repaired and repainted, the hull and superstructure were repainted, the tank arrangement was reorganized and the engines were overhauled. Onboard systems like the treatment unit and the watermaker were also serviced then, and navigation systems were brought up to speed with state-of-the-art equipment.

With an interior volume of 1,500 GT, Eos offers accommodation for 14 guests across seven suites and a crew of 21 – a necessarily high number because sailing it is no single-man job. Eos was never offered for charter, though legend has it that it has hosted some of the biggest stars in the world, including Jeff Bezos on his final week as Amazon CEO in 2021, singer and actor Harry Styles, and television host and reality star producer Andy Cohen.

Because it’s always been used privately, details on the interior are as scarce as photos of the same, but again, legend has it that features a viewing lounge with panoramic views, a jacuzzi, a 4.2-meter (14-foot) mural of the world map, and a most glamorous staircase made of glass. A 2.7-meter (9-foot) tall sculpture by Anh Duong, showing Diane von Furstenberg, graces Eos as figurehead. von Furstenberg usually posts to social while onboard Eos during summer-long journeys, but she always makes sure her photos don’t show much of the interior.

In 2009, when Eos pulled into an Australian port for some maintenance work, captain Lucas Alexander told the local media that sailing Eos felt like living in a high-end villa at sea. He also said that the vessel never traveled by a preset itinerary, which, if true, probably helps with keeping it a mystery. 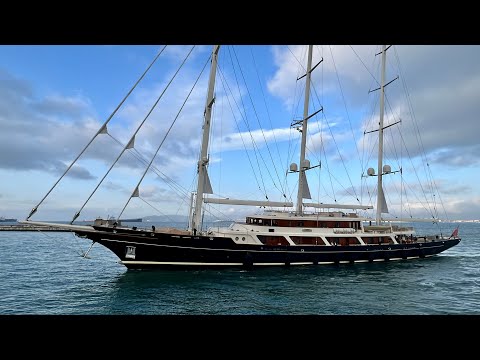