1 Inside Roberto Cavalli’s Superyacht Freedom, Inspired by the Batmobile

4 Phillippe Briand SY200: The Performance of a Racing Yacht With Zero Emissions

5 Columbus’ Dragon Is a Beast of a Yacht With Glass Elevator, Waterfall and Grotto
Car video reviews:
Up Next

One of the most visually impressive and beautiful boats in the world is, without a doubt, Black Pearl – not the one popularized by Captain Sparrow in the Disney franchise Pirates of the Caribbean, but the one built by Oceanco.

Black Pearl, the Stunning Superyacht for the Eco-Conscious Modern Pirate

Black Pearl is one of the world’s largest sailboats, but it is not a sailboat per se. It’s actually qualified as a sail-assisted motor yacht, a 3-deck superyacht decker that uses massive (black) sails for added power and the reported ability to cross the Atlantic with zero fuel. It is also among the world’s largest superyachts.

Commissioned in 2010, launched in 2016 and finally delivered to the owner in 2018, Black Pearl has attracted plenty of interest during the entire production process and beyond. Strange enough, nothing is known of the owner as, as far as we can see, there are no photos available of its interiors. Some details are available, but the focus has fallen on the challenge it was to build it.

As noted in the video available at the bottom of the page, most of the “stuff” on Black Pearl has never been done before, so building it was the real challenge.

Shipyard Oceanco supplied the team of designers with the naval platform of a 98-meter (321-foot) yacht that they had built some time before. The designers, including world-renown Dykstra Naval Architects, Ken Freivokh, Nuvolari Lenard, BMT Nigel Gee and Gerard P. Villate, took the platform and made it bigger, using it to create what is now the 106.7-meter (350-foot) Black Pearl.

The biggest and most impressive alteration was the addition of three 70-meter (229-foot) carbon masts for the DynaRig system. The masts rotate, bringing the sails so close to one another that there’s no gap left between them. This allows them to act as a single airfoil and, in turn, translates into more speed for the boat.

During sea trials, Black Pearl was able to reach 30 knots using its sails alone. At the launch, the team of experts that had worked on it believed it would be possible for the owner to cross the Atlantic without using fuel at all – assuming he met the right weather conditions. As of the time of press, it’s unknown if he’s been able to accomplish this feat.

The black sails occupy an area of 2,700 square meters and can be furled in under 8 minutes, at the touch of a button. Good ol’ Captain Sparrow would be impressed!

Black Pearl has a steel hull and aluminum superstructure, and offers accommodation for 12 guests in 5 cabins: one master suite, 2 VIP suites and 2 double cabins. Not much is known of the interior, save that it is the work of designer Valentina Zannier and architect Gerard Villate, and that it’s inspired by Louis XIV, the last king of France. Actual photos of the furnishes are not available, but renders show the kind of cabins you’d see in a period film, the kind where strict decorum is a must even for the most trivial gesture.

Reports online note that one of the longest stages in the entire creative process behind Black Pearl was research for the interiors, as Zannier and Villate wanted to get the feel of the time just right. Press materials reveal a raised pilothouse and a superyacht sundeck, as well as a full beam beach club that can be converted into a cinema.

Given the amount of time and money invested in this project, it’s safe to assume though that amenities go whatever the wildest imagination can come up with.

More impressively, though, Black Pearl is eco-friendly. It has a waste heat recovery system, and can use its propeller as a turbine to generate electricity for on-board systems. It also has a hybrid propulsion system so, when it’s not powered by wind, it can sail at speeds of up to 17.5 knots using a pair of MTU 12V2000M72 diesel engines and two 400kW electrical propulsion motors.

Originally known as Project Solar, Black Pearl was built on a dare, more or less: the challenge to show that DynaRig-Equipped vessels have great potential for transatlantic cruises and impressive speeds. So far, Black Pearl is on the right path. 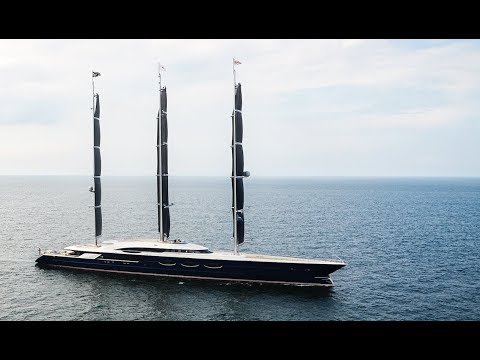 They Put Water Floats on a Spitfire? It Wasn't as Silly as it SoundsSee all coverstories