5 No Request To Dismantle the Vintage Bridge Yet to Make Room for Jeff Bezos' Superyacht
Car video reviews:
Up Next

National Average Gas Prices Keep Coming Down, It's Not All Good News Yet

Many shipyards will launch their latest builds to great fanfare, in front of staff, media, and yacht-watchers. Oceanco didn’t do any of that for Y721, the megayacht that is on track to becoming one of the world’s biggest, most expensive and most impressive ships ever built.

Jeff Bezos’ $500 Million Megayacht Launches Under the Cover of Darkness

A very controversial chapter in the multi-million saga of Jeff Bezos’ new sailing yacht has closed. Y721 from Dutch shipbuilder Oceanco launched earlier this week, under the cover of darkness, to avoid unwanted attention.

Word that Amazon founder and billionaire “space cowboy” Jeff Bezos had commissioned a new megayacht first started making the rounds in the spring of 2021. That vessel turned out to be in construction with Oceanco, a luxury Dutch shipyard that also delivered the record-breaking Black Pearl, one of the largest sail-assisted superyachts and one of the most technologically advanced vessels in the world.

In fact, it was said, Project 721, or Y721, was based on the Black Pearl in that it would use the same sailing technology, but would beat it in terms of size, luxury and performance. Once completed, Y721 will be the largest sailboat in the world and one of the most expensive as well, with a reported price tag of $500 million. That amount doesn’t include the matching shadow yacht.

Neither Amazon nor a spokesperson for Bezos would confirm the fact that Y721 is his, because this kind of splurge is not of the type you want advertised. Nonetheless, it is considered a fact in the industry. The association also led to civil unrest in Rotterdam at the beginning of 2022, when it emerged that, in order to make its way out to sea trials, Oceanco would dismantle a historic bridge to allow it to pass with all three masts on top of the superstructure.

Y721 is a three-masted schooner, with each of these masts measuring 70 meters (230 feet) in height. The Koningshaven bridge (also known as De Hef), a former railroad bridge that was the first to be rebuilt after the Nazis bombed the city, only offers a clearance of 40 meters (131 feet). Because Oceanco planned to have the megayacht leave the shipyard assembled, it asked to have a section of the bridge removed, to allow its passage.

The request was met with outrage from historians, politicians, and most importantly of all, from Rotterdam residents. The outrage peaked with the politicization of the issue and a call to arms by a resident who organized an event to pelt the vessel with eggs as it passed under the disassembled bridge.

In July this year, Oceanco announced that it had dropped its request for the disassembly of De Hef, citing civil unrest and the safety of its own staff for it. In other words, the things that were said made an impact, even if they were never carried through. One month later, it further showed that with a very unusual launch: under the cover of darkness, down a longer and less used route and bypassing De Hef altogether.

Hanco Bol of Dutch Yachting is one of the few people to have seen Y721 set out for sea trials, and he tells Der Spiegel that, instead of the usual Noord – Nieuwe Maas route, which would have brought the vessel under De Hef, transport company Koninklijke van der Wees chose the twice-as-long route of Noord – Oude Maas – Nieuwe Maas. Despite the added length, the journey was completed in just three hours, as if there was a rush to get to the destination before daybreak.

Y721 was brought out at 1 a.m. and started on its journey two hours later. Choosing the longer, darker and least expected route was “intentional,” Bol tells the publication. “When I was standing on one of the bridges, they shined a searchlight on me, so it wasn't easy for me to take pictures.”

One of the ship’s massive masts was seen on a barge, and Bol believes it will set out in the following days, with the others two coming next. Once assembled at the Greenport yard, Y721 will make its way to the North Sea, where it will start sea trials – but it won’t be able to get back to the shipyard for later adjustments or modifications like other ships, because of the same masts.

With this chapter closed, the 127-meter (417-foot) Y721 is still some distance from delivery to the owner. Earlier reports claimed a 2022 delivery date, but it’s entirely dependent on how sea trials go and whatever obstacles come up along the way. 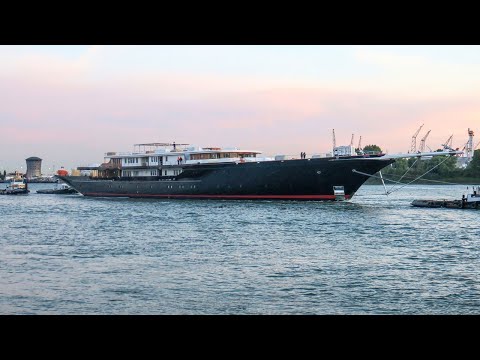