3 Superyacht Amadea Is Too Expensive for Fiji, at $1 Million a Week in Maintenance Costs

5 $700 Million Scheherazade Megayacht Has Refueled and Is Getting Ready to Flee Sanctions
Car video reviews:
Up Next

When it comes to custom superyachts built on a limitless budget, there is no finer choice for a builder than German shipyard Lurssen. One of the upcoming deliveries from Lurssen is Project Luminance, a megayacht set for launch in 2023 – and it may soon change owners unfinished.
7 photos

Lurssen built many of the world’s biggest, most elegant and expensive mega- and superyachts, and many of those we’re reading a lot about these days because their direct beneficiaries (i.e. owners) are sanctioned Russian oligarchs. These include The Flying Fox, Dilbar, Nord, and even Scheherazade, the $700 million gigantic boat believed to be owned by Russian President Vladimir Putin.

Money knows no allegiance, though. Right now, Lurssen is building Project Luminance, which is scheduled for launch in 2023 and is done on commission for Rinat Akhmetov, the richest man in Ukraine, with an estimated net worth of $7.3 billion. Akhmetov is also the owner of the Azovstal steel plant in Mariupol, which was the scene of fierce Ukrainian resistance until it fell under Russian control on May 20, 2022.

Akhmetov has previously spoken on Azovstal and his pride in knowing that it’s his steel plant that’s making such a brave stand against the Russian invasion. So what will the billionaire do now that it’s in Russian hands? According to Business Insider, one of his moves might include selling his unfinished Lurssen megayacht. “Given the current circumstances, we are considering its possible sale,” Jock Mendoza-Wilson, director of international relations for Akhmetov's company System Capital Management, says.

If this goes through, it will be one of the biggest and highest-profile naval transactions of recent years. Though not much is known of Project Luminance, this much IS known: it is a monster of a megayacht. At 476 feet (145 meters), it is longer than the 459-foot (140-meter) Scheherazade, so it must be even more expensive than the $700 million Putin reportedly paid for the latter.

The decision to sell did come after the fall of Azovstal, since the same media outlet notes that construction on Project Luminance continued at Lurssen after the start of the war on February 24, 2022. In fact, Akhmetov family members have flown to Germany frequently since, to oversee certain details of the build.

Here is the hull of Project Luminance being moved for assembly in early 2021, which is also the first time the public got to see it. 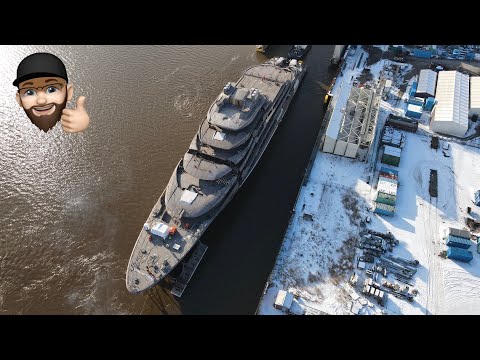