2 Sanctioned Megayacht Solaris Is Heading to the U.S., or Actively Trolling

4 Two of the World’s Biggest Superyachts, Nord and Motor Yacht A, Sail Under Russian Flag

5 Blade-Shaped $300M Megayacht A Has Been Hiding in Plain Sight for Weeks
Car video reviews:
Up Next

Home > News > Float and Dive
4 Jul 2022, 16:03 UTC ·
by Ancuta Iosub
Yet another billionaire can rejoice at the thought of spending this glorious summer on their own yacht. Lurssen Yachts’ most recent project, the Blue superyacht, has been delivered to its owner this past weekend.
7 photos

Blue is a 525-foot-long (160-meter-long) motor yacht built in Germany that has been recently recognized as the fifth-largest private yacht in the world. The four-deck vessel has a gross tonnage of 15,320 gross tons and comes with a 73.8-foot (22.5-meter) beam. Compared to similarly-sized crafts, Blue is about 8,145 gross tons above the average.

Designed by Terence Disdale’s studio and with naval architecture signed off by Lurssen, the Blue superyacht features a teak deck, a steel hull, and an aluminum superstructure.

The last time Blue has been spotted by yacht watchers was in February when it existed Lurssen’s shed. Not many details have been disclosed by the shipyard in terms of amenities since then, but we do know Blue boasts not one but two helipads, one on the foredeck and a second one on the uppermost deck.

It is estimated, though, that the megayacht can accommodate 48 guests in 24 cabins, along with 80 crew members in 40 cabins.

Moreover, in the video below, which was filmed before delivery, we can see two tenders stowed alongside an upper deck. We can also spot a generous swim platform that appears to be built to double as a beach area, as it extends into an opening area.

The engineering team at Lurssen equipped the megayacht with a diesel-electric propulsion system. Two diesel engines connect to electric motors that drive the props. Said electric engines also have Power Take Off and Power Take In units, making it more energy-efficient and more friendly to the environment, as specifically requested by the owner.

As reported by MegaYacht News, Blue is now underway at an impressive 19 knots (21.8 mph/35.1 kph). The vessel is on its way to Malta where it’s set to begin her maiden Med season. 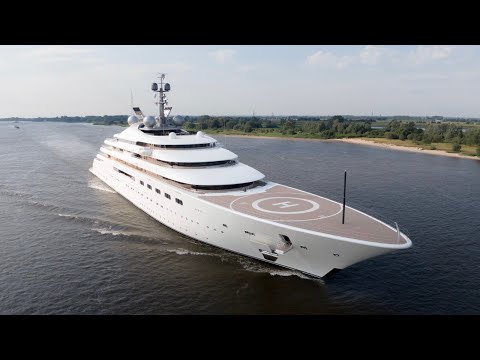