1 Shelby GT350 Drag Races Chevy Camaro SS, Both Tuned Out of Their Minds

3 LS-Swapped Ford Mustang With 8 Turbos Is Almost Ready, We Talk to Its Creator

2022 Ford Maverick Small Pickup Truck Pricing May Start From Under $20,000

It has been over a month now since we've been keeping an eye out for the 8-turbo, LS-swapped Ford Mustang Kyle Williams being built in Canada. And the big day has come. The owner loaded the car onto the trailer, and went straight to the dyno to see what kind of numbers his Frankenstein-like project could pull off.

With temperatures still in the freezing range in Canada, there were some issues Kyle had to overcome after transporting the car to the dyno. New spark plugs were fitted before the first start, and for the upcoming runs, he also swapped out the winter tires on the car in favor of a set of slick ones. But at least the Mustang was now in the AFR Autoworks shop, and the whole world was curious to see what the outcome would actually be.

Before watching the video, you might want to keep in mind Kyle's words: "The budget is about $3,000 and the turbos are $80 each. That being said it still worked well-ish". There has been a lot of debate over this build over the past two months, and there are those who firmly believed the result would be nothing more than entertaining. Some have even pointed their fingers at the build, noting that this will not be in any way effective and that it will only serve to attract attention to Kyle's Youtube channel.

But you can't deny the creativity and the drive behind the idea. Life's short, and we're meant to have fun. So no matter how many people will dismiss the idea as being inefficient or ridiculous, we still think it's extremely fun to follow. As the car is being strapped to the dyno, Kyle walks us through the plan for the day, as he describes that they will be gradually increasing boost during testing.

We've seen and heard a lot of cars on the dyno over the years, but this thing has a growl of its own. When those turbos spool up, it makes for a visceral experience. For the first recorded run, they took it slow, and the car registered 363.1 horsepower at 4,650 rpm and a max torque of 414 lb-ft (561 Nm) at 4,600 rpm, without taking it through the entire rev range. Things were already looking better on the third run, as the test showed a maximum output of 480.6 horsepower and 465.2 lb-ft (630 Nm) of torque.

Even though the Mustang was dyno'ed at over 500 horsepower just five runs in, after eight total runs, it was becoming obvious that the car was facing some issues, as it was only getting slightly over 400 horsepower. Kyle didn't seem to be too upset about the situation: "We kind of knew that this setup was not efficient in ways that it should be efficient but it's fun!" After some more tweaking, they manage to bring the figures up to 555.2 horsepower at 6,775 rpm, but there was still room for more.

In an attempt to figure out what the problem was, the team started inspecting each turbo individually, looking for vacuum leaks or any other kind of problem that might have occurred. Kyle seemed certain that everything was working better back when he first took the car out of the garage. Several hours later, the team was still hard at work as they started dismantling the turbos to make some adjustments.

As they pushed into the night, one of the turbos seemed to be affected, and they decided to stop. "When you're on your low airflow, what happens is your turbo goes into surge and stalls out, it stops absorbing air. It will over speed and it's damaging to your turbo. This one is fighting against the output pressure of seven other turbos competing to get air down that pipe. So it is going to be the hardest working turbo," one of the guys at AFR explained.

At the end of the day, Kyle was hoping to see a four-digit result in terms of horsepower, and he was initially planning on hooking up the nitrous system to get to that point. "We did have the nitrous there. We planned not to use it because of the obvious flaw with the boost. If the boost would have held steady at 33 PSI and we would have made 750 wheel horsepower with it, then I would have added the nitrous, but it was no point trying to band-aid the boost fix with nitrous."

But it seems that at least for now, he's going to have to go back to the shop and change a few things on the design to have it working properly. "Overall we couldn't get consistency out of the thing. One pass would make 33 PSI (2.27 Bar), one pass would make 23 PSI (1.58 Bar), so, it's back to the drawing board". Once again, it's obvious that Kyle has got a real passion for building cars, as he's ultimately just one guy in a two-car garage, working on a limited budget while trying to have fun with the whole thing and not get too worked up about it.

As some other people pointed out, it might be an idea for Kyle to swap out the current turbos in favor of some slightly more capable ones, even though that might have him go over his initial budget. We won't be surprised if, by the end of the month, he manages to reach that 1,000 horsepower target and also does a sub-9 second run at the drag strip when everything will be ready. Either way, his work so far is proof that if you have the will to do something, no amount of hate comments of disbelief can stop you in your tracks. 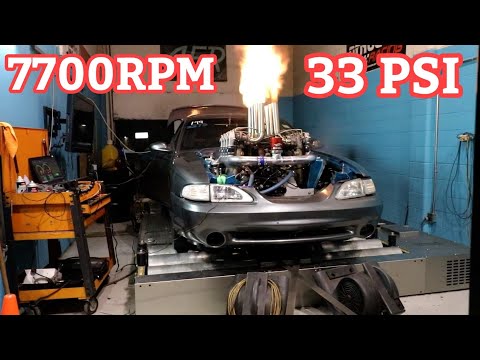 59 Years After Its Debut, the W113 SL “Pagoda” Remains a Groundbreaking Open-Top IconSee all coverstories