Ford introduced a heavily revised version of the Everest SUV in 2018, adopting similar style changes as those performed on the Ranger pickup.

Ford carried over the same chassis used for the Ranger when it made the Everest SUV, but instead of using a pickup bodywork, it placed a fully-closed one. By doing this, the American carmaker added a new model to its lineup without significant development costs.

With its bold front fascia that featured a grille with three horizontal slats, the Everest tried to dominate the South-Eastern Asian and Australian markets. In addition, the headlights sported daytime running lights on the bottom of the headlamps, thus adding an elegant flavor to the rugged vehicle. In addition, Ford also installed e new bumper that featured a lower section that mimicked a shield. ALike its Ranger sibling, the Everest featured a pair of fake exhaust vents mounted up on the front fenders behind the wheel arches. At the rear, the taillights were extended from the rear quarter panels to the tailgate and visually connected by a chromed horizontal slat that carried the Everest nameplate.

Inside, the Everest featured a three-row seating capacity. There were two bucket seats at the front, three in the middle row, and two in the last. The automaker improved the interior features by adding vents on the ceiling and a 230 volts outlet behind the center console. Like the Ranger, it featured an 8” touchscreen SYNC infotainment unit placed atop the center stack and two digital displays inside the instrument panel that flanked the analog speedometer.

Underneath the hood, Ford Everest received a choice of turbo-diesel engines. The base model was powered by the 192 HP 3.2-liter inline-five unit, while the range-topper received the brand new 2.0-liter bi-turbo-diesel unit that was good for 214 HP. 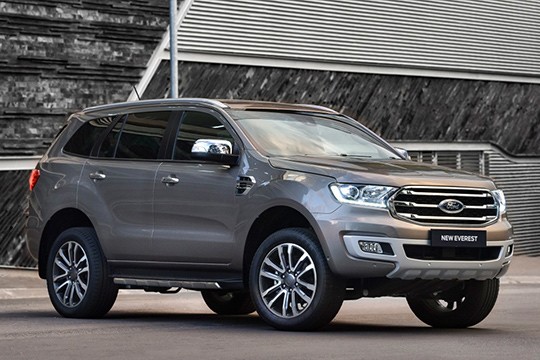