3 This Supra Can Drift by Itself, Artificial Intelligence Learns From Pro Drifters

How It's Made - Most Expensive, Kevlar Body, Drift Spec Toyota Supra A90 Secrets

I remember being in Poland back in 2013 at a major, European drift event and seeing the HGK Racing BMW E46 in action. It was one of their first creations or at least the first one with such a huge impact. When they officially presented the car in 2012, it was an instant hit, as it was one of the first-ever drift builds with such a high level of complexity. And HGK learned from that build and continued to improve over years.
44 photos

Kristaps Bluss is just one of the pro drifters to have competed in an HGK Racing developed drift car over years, and he has had his fair share of success in the Formula Drift Series. But after a series of highly fascinating BMWs, it was time for a change. And with Russian drifter Nikita Shikov requiring a new car for the 2021 season, the Toyota Supra Jet project was initiated.

It all started with a sideways shakedown on dirt roads, in a movie that was posted some time ago, and the Supra once again confirmed its potential. Asked about how the project debuted, the owner of HGK Racing, Harijs, said that "We wanted and did not want to build the Supra at the same time, but when it came to the shop we realized that, of course, the car was really good. I liked it!"

The plan was all set, and several people and companies were involved in the build. The stripping down part was probably the easiest, as it only took 3 days. Body reconstruction was up next, and given the scale of the project, they had it treated with a special kind of chalk and then 3D scanned inside and out. Soon after, a special delivery from Wisefab came in, that would allow the vehicle to have an increased steering angle - essential in pro-level drifting.

With more horsepower in mind, bigger wheels would be required. But 18-inch wheels would not fit under given conditions, especially considering the increased steering angle, so more bodywork followed. Next, the fuel cell was located in the middle of the car, bearing in mind that good weight distribution is also essential when going at insanely high speeds, and sideways at the same time.

The stock electric steering rack of the Supra was ditched in favor of a BMW E90 one, which is widely used in all HGK builds. When work on the front end was completed, the roll cage was up next. HGK usually builds NASCAR style roll cages, but this time they improved the design, given their extensive experience, and came up with an updated solution. When the roll cage was half-done, the ARE dry-sump system was positioned behind the passenger seat.

When work on the chassis was about 60% complete, HGK sent the Supra to a third party company, that would start working on the actual body parts for the build. Two months later, after all the measurements and initial mock-up fitting was done, they got the car back and finalized the roll cage. The car then had to be painted, inside and out, and they opted for the same McLaren Silver they use on all their projects.

The original seat mounts were kept, making the job slightly easier, although new brackets were built to accommodate the Sparco bucket seats. As many components as possible were relocated from the engine bay to the rear axle, to further improve the weight ratio, including the HGK custom-built radiator. The company was using CRR radiators in the past, but because they were using custom-built ones, prices had gone up too much, and they just started manufacturing their own products.

The car was then sent to Chepa Racing in the Ukraine, where the new 2JZ unit would be installed. After a few months spent in Kyiv, it came back to HGK Racing so that bodywork could be finalized. As Kristaps Bluss describes the process, this is perhaps one of the most difficult parts of the build, as the computer designs don't always fit perfectly into real-life applications. All in all, it took 12 months for the build to be finished, and HGK Racing managed to nicely summarize the whole process in this 20-minute video. 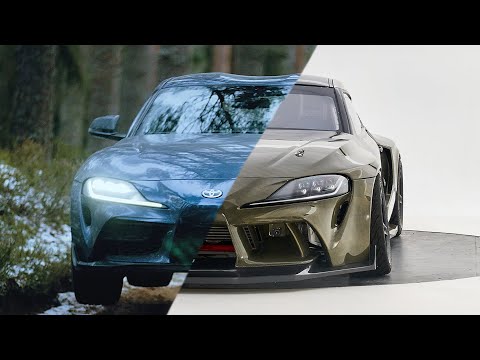