In the 1970s, the U.S. automotive industry was going through what was called the “Malaise era,” characterized by rigorous and strict emissions regulations. The decade is often seen as the dark age for car design, with the 1974 oil crisis leading to the demise of many sports cars on the continent. Meanwhile, car manufacturers from Europe and Japan carried on with their car design duties and came up with real gems. Also, they capitalized on the situation in the U.S. and imported their cars to North America.

Japanese car brand Datsun (now part of modern-day Nissan) built some of its finest cars during the 1970s. It took the world by storm in 1969 with the Datsun 240Z (also known in Japan as the Fairlady Z), a car that didn’t have the power of American muscle cars of the era but was capable of offering equally fast experiences and better handling. As a result, it quickly became very popular state-side among sports car fans.

The earlier Datsun variations (240Z, 260Z, 280Z, 280ZX) would sell like hotcakes, with the company delivering in excess of 160,000 units during the car’s 9-year production run. With its gorgeous shape, long nose, and fastback rear hatch, the first two-seat 240Z somehow reminisced the Jaguar E-type or a Ferrari, but it was way more affordable, so the public fell in love with it.

It’s no surprise, then, that the Z range is also quite popular among collectors. One die-hard fan of these Japanese sports cars spent the last 20 years putting together an outstanding collection of low-mile Datsun Z models that are now offered for sale through Bring a Trailer.

The special collection comprises six vintage sports cars, the first of which is a 1970 Datsun 240Z. Finished in Safari Gold with a black vinyl interior, this is the collection’s crown jewel.

It is a Series I unit and features a 2.4-liter L24 inline-six coupled to a four-speed manual transmission. The engine was only rated at 151 horsepower (153 ps) and 146 lb-ft of torque when new, but that was enough to propel the Datsun from zero to 60 mph (0 to 97 kph) in 7.8 seconds. This specimen recently went through a multi-year restoration meant to return it to its former glory and is offered with only 38,000 miles (61,115 km) shown on the odo.

Next up is a 1973 Datsun 240Z that was originally sold new in California. This one comes with Lime livery with some black bodyside graphics, complemented by black vinyl upholstery and chrome bumpers. This ’73 example takes power from a 2.4-liter inline-six engine mated to a five-speed manual transmission. Noteworthy features include twin SU carburetors, an aftermarket exhaust system, PerTronix electronic ignition, as well as air conditioning, and a Hitachi AM/FM radio.

The last 240Z in the collection was also manufactured in 1973 but is finished in Olive Green paint over brown vinyl upholstery. This low-mile example shows under 14,000 miles (22,530 km) on the clock. It is powered by the same 2.4-liter inline-six paired with a four-speed manual, features front and rear bumper guards, and rides on 14″ steel wheels.

A silver 1974 Datsun 260Z with only 6,000 original miles (9,656 km) on the odometer is also part of the lot, added to the collection in 2017. Besides the impressively low mileage, this specimen stands out due to its chrome bumpers with rubber overriders, a contrasting gray tail panel, and a driver-side mirror.

Both examples are powered by 2.8-liter L28 inline-six mills with electronic fuel injection mated to four-speed manual transmissions. The engine was factory rated at 170 horsepower (173 ps).

The carefully-selected Datsun Z models in this collection are sold separately and are sure to pique the interest of classic sports car fans and JDM-style enthusiasts alike. The Safari Gold 1970 Datsun 240Z has already found a new owner (it sold for $165,000), but there are still five remaining Z cars you can bid on, so go check them out on Bring a Trailer. 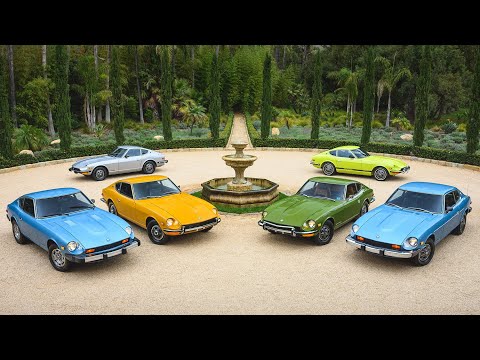