In 2018, the re-introduced Datsun brand unveiled the facelifted version of the GO+ seven-seater vehicle on emerging markets and improved the vehicle's look and safety.

When Nissan decided to have a budget-brand, it pulled the Datsun nameplate from the storage, dusted it off, and placed it on a refurbished 2010 Nissan Micra (K13). With a new front fascia and extended bodywork, the GO+ saw the light of day in 2014, but it wasn't the expected hit on the market. Four years later, the carmaker considered upgrading the lineup.

The GO+ shared the same platform as the GO model, both based on the same platform as the former Nissan Micra. With the 2018 model update, the carmaker installed a new front bumper that included LED daytime running lights on the side scoops next to the redesigned lower grille. On its sides, the car showed the new 14" light-alloy wheels. The GO+ featured a longer greenhouse with an additional side window behind the C-pillar. In the back, Datsun installed a windscreen wiper and, as an option, parking sensors.

Inside, the GO+ featured three rows of seats. Although, judging by the interior dimensions, it was challenging to put someone in the last row. That was large enough for a shopping bag. With all seats up, the trunk was good enough for an envelope. Unlike the GO, the GO+ featured a beige dashboard with the gear-lever on the center stack. Datsun offered a new infotainment system with a touch-screen that supported Android Auto and Apple CarPlay.

Nissan provided the 1.2-liter, three-cylinder engine that provided 68 hp. The carmaker paired it to a five-speed manual or a CVT as an option. 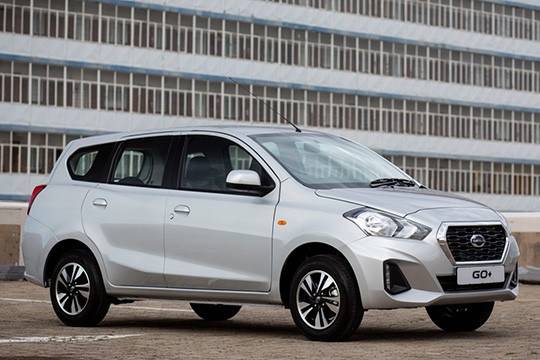