In 2013, Nissan revived its Datsun nameplate as a budget-brand, and its first product was the GO, which was facelifted in 2018.

On some markets, customers just wanted a simple vehicle to climb inside and go, and one of the major purchasing decisions is the price. Nissan made the GO for those customers and badged it as a Datsun. While the original model was stripped from most safety systems, it didn't even feature an ABS. The refreshed version returned with more than that.

Just by looking at the car, some would recognize the car's overall shape, and it wouldn't be wrong. It was built on the same platform as the 2010 Nissan Micra (K13). The carmaker did more than just trade the Nissan badge with a Datsun and changed most of the body panels. At the front, the car featured angular-shaped headlights, swept-back toward the A-pillars. A big hexagonal grille with a chromed surrounding made the car's front more visible. The bumper featured daytime running lights on the side scoops, while the reversed trapezoidal grille tried to make the car look sportier. In the back, the taillights featured an angular design as well. Most importantly, Nissan introduced a rear windscreen wiper.

Inside, the 2018 Datsun GO featured a sculptured-shaped dash-panel with a v-shaped theme for the frontal area. Nissan installed an Android Auto infotainment system (available as an option). The car featured power-windows and mirrors, air-conditioning, and dual airbags. Datsun installed two seats at the front instead of the previously used bench and placed the jack under the driver's seat. The rear bench featured a one-piece folding seatback.

Under the hood, Nissan installed a 1.2-liter, inline-three engine as the only option. The standard transmission was a five-speed manual and an option for a CVT. 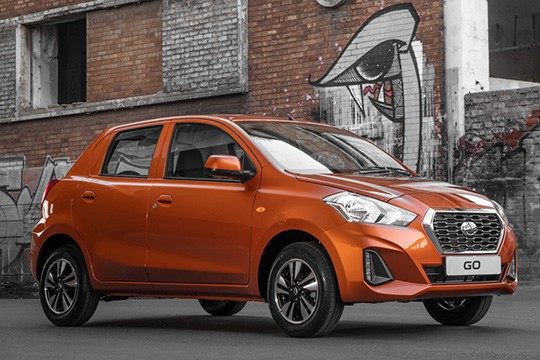