The Japanese Datsun brand was brought back to life after Renault-Nissan Alliance decided to create a new, more affordable sub-brand.

In India, Datsun already had brand awareness, so Renault-Nissan had to find a solution to make it live again. For that, they took the older generation of the Nissan Micra, installed older Renault engines underneath its hood, and then gave it an identity. Moreover, they already had the parts and stamps to make the bodywork, and, in addition, the car's development costs were already covered.

It's hard not to see that behind that bold grille was a Nissan Micra K13 (fourth generation) that was launched in Europe in 2009. But since the design trends had already moved away from the bio-design era to the new-edge styling, the Go got sharper-looking headlights. Moreover, since the bumper and the front fascia were molded into one piece, it meant that the lower side could have been changed to look more aggressively. On its sides, the carmaker added a few plastic parts over the rear doors, thus concealing the rounded lines of the C-pillars. Finally, the taillights got a slightly different design but the same base, so they could fit in the same place as those from the original Micra.

Inside, the Go received a new dashboard with an opened storage area in front of the side passenger. The carmaker didn't offer top-quality materials, but they were fine for the Go's price range. In addition, the door panels sport pockets wide enough to keep water bottles. Strangely, though, the power windows that were offered as an option got a separate panel mounted in a free-floating position.

Under the hood, Renault gave its 1.2-liter gasoline engines that were already developed for the European market and available on a few small-sized vehicles. 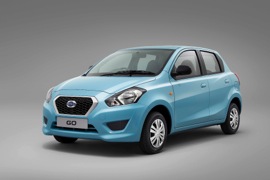