Epic Games, the creator of worldwide gaming phenomena such as the Fortnite, Unreal, Gears of War, or Infinity Blade series, has recently announced it has created an Unreal Engine-based Human-Machine Interface (HMI) dedicated to the automotive realm. And its first major partner will be General Motors, with its upcoming GMC Hummer EV electric pickup truck featuring a digital cockpit powered by the award-winning game engine.
45 photos

Well, given how Tesla is today setting the pace in the electric vehicle segment, it was clearly just a matter of time until Tesla’s Arcade inspired other automakers. It’s clearly a surprise that we’ll be seeing GM take the gauntlet for possible gaming-inspired competition in the realm of next-generation 2D / 3D infotainment experiences.

Sure, for now Epic Games is only touting the Unreal Engine’s new-found capabilities in the creation and development of automotive infotainment and digital cockpit experiences. But they’re also opening an entire world of opportunities through wide-ranging partnerships BlackBerry QNX, Mapbox, Qualcomm, among others.

And they are specifically targeting future evolution with their opening statements: “as we move towards level five vehicle autonomy, in-car infotainment systems will become more and more relevant to influencing consumer purchase decisions, and Unreal Engine will bring new levels of flexibility, interactivity and visual fidelity to these next generation systems,” according to François Antoine, Director of HMI and Embedded Systems, Epic Games.

Of course, at first, Unreal on the GMC Hummer EV will focus on the digital cockpit graphics. Still, even the Unreal HMI demonstration video (embedded below) delivers its own Easter Egg when discussing the interface.

First of all, the cockpit in the footage looks entirely generic and a little bit too much inspired by Tesla’s Model 3 and Y application (huge central screen with landscape orientation and way too resembling graphics, no instrument cluster), so we hope it’s not a teaser for the actual look of the Hummer EV’s dashboard. We did notice the clay model though (check it out in the gallery), and that one looks more the part for the EV pickup truck!

Then, when diving deeper, we can see a generic-looking sports car – but more importantly Epic also starts talking about the wide-ranging opportunities. And, when pinpointing (from the 1:28 mark) the upcoming “customizable experiences with downloadable content” it’s quite clear they are using Rocket League (soccer and rocket-powered cars!) as a reference. 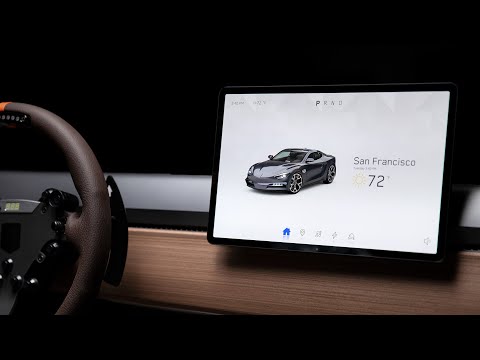