The world almost forgot the Hummer brand in 2020 when GM resurrected it with the introduction of the EV, an electric pickup that flexed its muscles over rough terrain.

Hummer evolved from a military vehicle to a civilian SUV, and in 1992 it started to sell civilian vehicles based on the army model. It was the Hummer H1 followed later on by the H2 and the H3 models. During the world economic crisis, Hummer went bankrupt and was just a step away from being purchased by a Chinese company. But the Chinese government said no, so the brand stayed in the GMC portfolio, but without any product.

The vehicle's look resembled the H2 model, with a wide and square design for the front end. The greenhouse looked like a box on top of another box, with an open bed in the back. While it wasn't the first vehicle of this type built by Hummer, the EV showed a modern styling, even if it was a retro-design. But it was made well.

Inside, the square design was continued, but with modern touches. In front of the driver, the designers installed a 12.3" digital instrument display. On top of the center stack, there was a bigger, 13.4" infotainment display. The top cover was removable and could have been stored in the "frunk," where the previous Hummers used to install the engines.

The drivetrain was impressive. With three electric motors and all-wheel-steering ability, the Hummer EV was built for real, tough, off-road. Its 35" off-road tires were a prove for that. The drivetrain produced a total of 1000 hp and a huge 11500 lb-ft (15591 Nm) of torque, the equivalent of ten Bugatti Chiron! 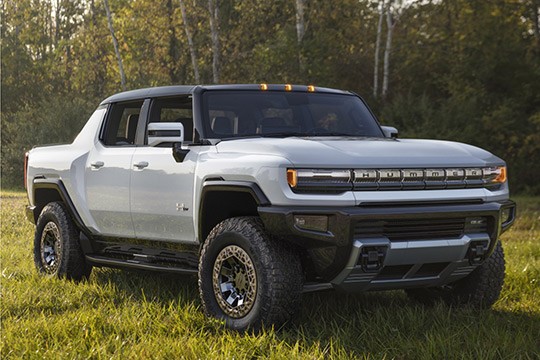