GMC didn't consider to build an SUV that couldn't cope with some off-road abilities, and the AT4 version was the most capable from the Yukon range.

While most of the Yukon buyers chose the Denali trim level, the carmaker considered that it might offer something even better for those with a sense of camping trips. The AT4 version was radically changed when compared to the regular version of the full-size SUV.

The Yukon AT4 featured the same LED headlights as its siblings, but instead of the chromed grille, it sported a massive black big enough to serve as a gate. The engineers raised the lower part of the bumper and installed a genuine shield under the engine compartment. Thus, they helped the big SUV achieve a 32 degrees angle of approach. A set of two, effortless to spot, red tow hooks reminded the owner that the big rig might get stuck.

Inside, the AT4 was available with seating for seven, even though the SUV was based on the Yukon's regular wheelbase. The dashboard featured multiple buttons for the driver and its side passenger. An important novelty for the car was the push-button transmission selector, with two holes for the R and D positions. A wide touch-screen took the most of the center stack, while the HVAC controls found their spot angled at the bottom of it.

GMC offered the AT4 version with the same choice of engines from the rest of the range: a 5.3-liter for the base model and a 6.2-liter for the full-options. A 3.0-liter turbodiesel supplied by Cummins might be considered as well. 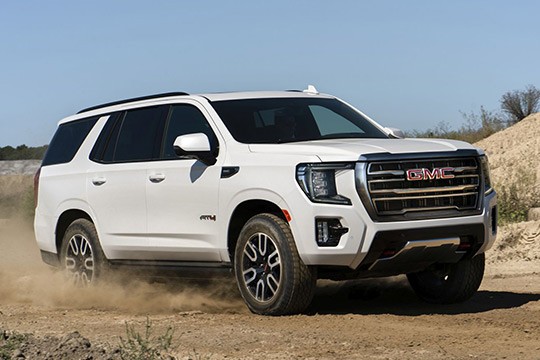