2 This Is How the Tesla Autopilot Hardware 3.0 Brain Looks Like Inside

3 Tesla Model 3 to Apply Corrective Steering with Autopilot Off

Tesla is a different kind of automotive company – it only produces electric cars, has its own battery factory, it even makes you energy-independent if you live somewhere shiny and can take full advantage of its solar tiles and Powerwall. It is also very bold when it comes to modern technologies – including its Autopilot suite of driving assistance systems. And because OTAs are being pushed out on a regular basis we turn to the user community to find out what is new more often than not.
6 photos

Elon Musk has been feisty when it comes to dealing with Autopilot – both in official scenarios (such as the latest conference about the Tesla earnings) and the well-known cover of social media. Different entities have been constantly disputing his claims and have been warning about the implications of trusting a set of computer systems with powers beyond their known capabilities – just because Elon said so.

To this very day, most self-driving-related fatalities and even some odd accidents have involved the U.S. company’s vehicles. So, with the official channels shown to be rather biased and the experts thoroughly disputed by Elon and Co. we can do one simple thing – check out the user community. And Tesla has a sprawling one – so you can bet anything new will quickly be put through its paces.

This is what happened recently with the Autopilot after the system was upgraded with the Tesla 2020.28.5 update, courtesy of YouTube channel Tesla Driver. User feedback has been crucial to both the entire Tesla community and the company itself – as the California-based automaker is taking all the knowledge gathered by other drivers using Autopilot to enhance the background learning process.

And with the user seen here a long way from the company headquarters we can understand the value of such data. It is also great that people offer their experience on the silver platter – how many times have you used such input to solve a real-world issue? We know we did on countless occasions.

This time around we are dealing with a great example of how improvements can easily coexist with drawbacks. Let us set the point straight, Tesla’s Autopilot is a driver-assistance technology that reduces the workload on the user, but they do need to remain attentive. It is by no means ready for self-driving prime time even if the company pompously enables acronyms such as “Autopilot Full Self Drive”.

This particular point is thoroughly supported by this great video embedded below. Tesla Driver says he purposely took his Model 3 Performance with the hardware that has all the bells and whistles needed for the upcoming full self-driving features on a completely new route and let it handle itself.

That really is unlike Musk’s own "widely varying situations" from home to office and back (roads that he probably used a gazillion times already). The improvements are there – some situations that you would expect to bring about a spectacular fail are handled well. And so are the shortfalls – with a particular near miss when the driver clearly intervened to save the situation from possible disaster... 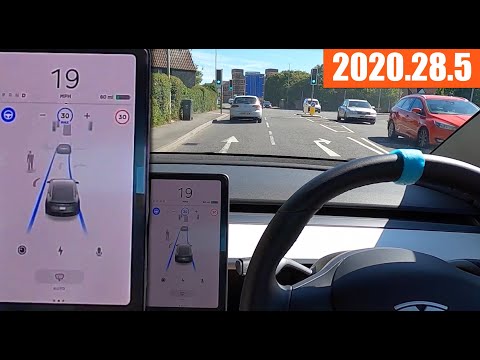