GMC introduced the fifth generation of the Yukon XL in December 2019, and it was based on the same platform as the Chevrolet Tahoe and Cadillac Escalade ESV.

While Escalade got the attention from superstars and the authorities preferred the Tahoe, the Yukon aimed to the regular Joe and Jane with a down-to-earth design. It was just a typical SUV for everyday people. Maybe not that regular, mostly if they were a big family.

The fifth-generation was completely redesigned, and it was available in two length versions: the Yukon and the Yukon XL. The latter was easy to spot due to its longer rear doors and its last row of windows. These were necessary due to the longer wheelbase. At the front, though, both vehicles wore the same C-shaped signature LED headlights and the broad grille with horizontal slats, where the GMC badge found its place. For the Denali trim level, the grille looked more like a chromed fence.

Inside, the XL version featured a sliding center console and room for up to nine people, depending on the seat options. In standard trim level, it offered space for seven in a 2+2+3 configuration. But according to the official statements, 60% of the Yukon customers chose the Denali version that featured all the bells and whistles GMC could provide. That included a 15” Head-up Display and a premium sound system that could compete with the equipment from your local country club.

GMC introduced full independent suspension for the Yukon with air-spring on all corners. That not only improved the comfort level, but it also added a touch of inspiration since the car could have been lowered for easier access. Under the hood, GMC dropped a choice of two engines: a 5.3-liter V8 and a 6.2-liter V8. 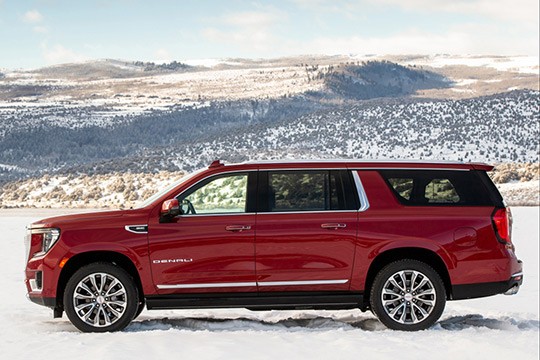