Motorsports Photography 101: You Too Can Get to the Top

Aurel Niculescu
Usually, there is no need to exaggerate the aftermarket realm’s influence throughout OEM action, but the automotive industry is one of the biggest examples of such cool shenanigans.
9 photos

And there is no need to take our word for granted. It suffices to think of North America and its overarching influence over what carmakers build and for whom. For example, the latest Mercedes-Benz S-Class (W223) might be seen as a technological tour de force and nothing else, especially stylistically, by many Old Continent fans.

But the truth is BMW has decided to play the ultra-outrageous card just to attract the attention of North American customers who simply cannot get enough of the murdered-out Maybach W223s and whatnot. Hey, the Bavarian automaker has even opted for its second-ever M GmbH vehicle to become the laughingstock of the design community, just to be sure there will be plenty of ritzy customers who just want to use the up to 735-hp XM Label Red as a measure of their (massive) egos.

And we could go on forever, but let us get back on the right SUV track, because we have something fresh to show you. No, it is not Meek Mill’s recently-ordered 715-hp Ferrari Purosangue configuration just yet. Instead, let us get back to a special Mercedes SUV that – alongside the equally legendary Range Rover – probably started all the luxury rock/mall-crawling madness in the first place.

That would be the Mercedes-Benz G-Class, of course. By the way, those who think the G-Wagen, especially the posh, yet feisty Mercedes-AMG G 63 version, has taken a step back against the opposing forces of Lambo Urus and Rolls-Royce Cullinan ultra-luxury super-SUVs, better think again. Just recently, we have seen everything, from ‘delicate’ Mercedes-AMG G 800 by Brabus monsters holding the cure to light firearm bullet allergy to the Apocalypse Cerberus 6x6.

Which, by the way, is a Kevlar-styled, custom 6x6 pickup truck worth over half a million bucks that can travel any roads unknown, probably even on Mars. Speaking of rock-crawling and dune-bashing efforts on behalf of the Mercedes-AMG G 63, remember how the German automaker presented this summer the latest and greatest version, the iconic 4x4 Squared? Well, slowly, but steadily, the first examples of this limited-production variant are making their way to the United States.

According to the good folks over at Los Angeles, California-based Platinum Motorsport Group, who pride themselves on being leaders in the customization area for decades, the “very first” Mercedes-AMG G 63 4x4 Squared has (finally) landed on its lifted suspension and other Satin Black goodies in the Los Angeles, California area. Naturally, the customization and personalization dealership has seen fit to present it on social media, and of course, we have all the goodies embedded below, including the latest YouTube vlog and the posh Instagram reel.

By the way, the company promises this dark and menacing example (one of around 300 units earmarked for North America out of a total of just 800, allegedly) will soon be joined by a couple of siblings – an Arabian Gray with a Red interior unit, plus a subtler white on red one. And that is not all, as one of these examples is right in the middle of the customization process with “all the Brabus parts that Brabus has to offer.” Plus, new wheels, electronic running boards, and other personalization mods.

As always, just in case this is not really your customization cup of tea, we also present you with a ritzy alternative. So, how about this monochromatic Frozen Silver Rolls-Royce Cullinan captured by the good folks over at RDB LA looking decidedly ready to provide a chilly match for the upcoming winter? 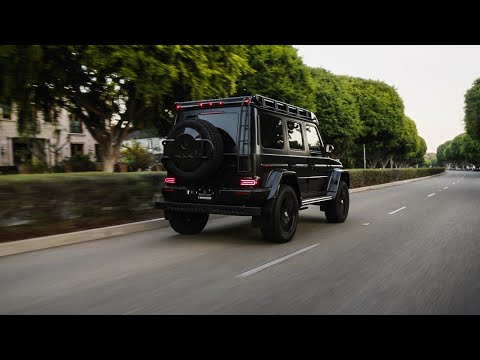