Let's face it, the pickup truck is one of the world's most trusted and versatile vehicles. Why? Simple because of that bed and plenty of power under the hood to take you where you want to go, carry whatever you feel like, and even be used as a mobile habitat. Whatever you do with a truck, a topper can be a great addition.

Today I'm going to be talking about something that I've recently run across: an addition to most trucks on the market. Yes, I'll be talking about truck toppers today. Actually, just one topper, GFC's (GoFast Campers) Platform Topper (PT), a component that you can add to your existing truck and extend its capabilities even further. You can even go as far as creating a livable habitat where you can escape the elements in case of a rogue storm. But let me slow things down so you can understand what's in store with this one.

The crew behind this trinket is GFC, and while much about them isn't known, we've covered their work before, the Platform Camper. It's an addition to your vehicle that transforms your truck into one of the most budget-friendly conversions around. As for the PT, it achieves a similar outcome, albeit missing the tent camper. However, that's not to say the PT doesn't have a few tricks up its sleeve too.

The main reason I chose to bring to light the PT is the video you'll find at the end of this article. As I watched it, something clicked. Maybe it was the quirky presentation or the way the topper stood up against that massive boulder being launched at it. It was enough for me to dive deeper, and indeed I did.

As I explored this topper, I started to understand why GFC is asking you to dish out at least $4,000 (€4,150 at current exchange rates) on this vehicle addition; it's not like your grandpa's truck bed topper. To start things off, let's take a closer look at the frame. Using an aluminum "triangulated spaceframe," GFC created a monster that can support a classic F-250. We're also told it "will never crack, wobble, rattle, or break." If it ever does, GFC can easily replace damaged components.

From the frame, part two of the story revolves around the load "Halo." While it may not seem like a big deal to be able to load gear on top of the PT, the moment you fill the interior with your adventure gear, you'll be glad you can also bring your kayak, add a bike rack, or simply throw a rooftop tent onto it. A translucent roof is also thrown into the mix.

GFC also prides itself on those lateral, lockable access panels. Not only are these components designed to keep your goods dry and at optimum temperature, but because they're built using aluminum, taking hits and still rolling is part of their ability.

With all that in mind, picture what you can do with your truck in the near future. Imagine the glamping adventures you can embark upon and feel the off-road excursions in your mind. To heck with imagining this sort of lifestyle, if you've got a truck, GFC's Platform Topper is one addition to your vehicle that you need to consider. 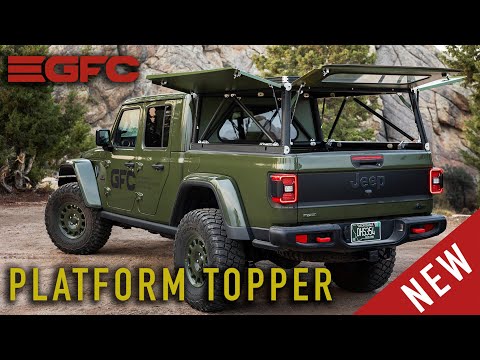