Built in the owner’s driveway, this Jeep Comanche is now a spacious, fully equipped aluminum camper with plenty of storage space, two lounging areas, and a Sunbrella canvas topper.
17 photos

Jim Barber, a.k.a. “sasquatch.the.nomad” on Instagram, bought the 1987 Jeep Comanche in 2019 and had to combine it with another Jeep, as the engine on the former blew up right after he bought it. The new rig, with parts from two Jeeps, comes with two fuel tanks, totaling a fuel capacity of approximately 47 gallons (178 liters).

The pop top camper was a DIY project that required Jim to learn stuff along the way, as he had little to no experience with building campers.

A pass-through from the driver’s cab to the kitchen of the camper lets you easily store items from the front and also lets the owners’ dogs move around freely. It comes with a curtain that separates the cab from the rest of the vehicle, offering privacy to those in the back and blocking any unwanted light from the front, when someone’s taking a nap.

The kitchen area in the Jeep is impressively well-equipped. It includes a slide-out Lagun table, a deep sink, a two-burner stove, a large 85-liter fridge/freezer, and plenty of storage space under the sink and in the drawers next to the fridge.

Right across from the kitchen, you’ve got a lounge area with a bench with under-storage. There’s another sitting area in the back, where Jim fitted an L-shaped bench, also with storage in it. And speaking about the back of the Jeep, it is accessible via a cool-looking, airplane-style door with built-in stairs.

The UV-resistant, waterproof Sunbrella canvas was the only thing not built by the owner, who had it made in a shop instead. It comes with separate windows with shades that can block all the light from outside when needed.

The Comanche-based camper also comes with two (100W) solar panels on the roof.

You can check out Jim’s DIY camper in the video below. 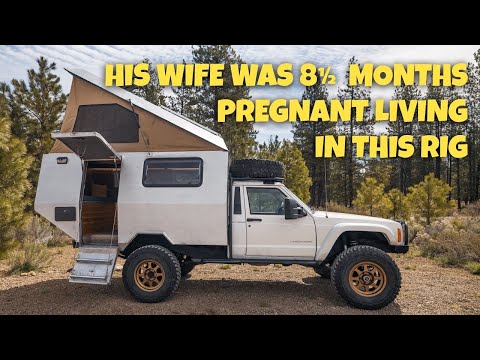