2 Here Is a Real Flying "Car" for Once, But There’s a Catch

3 Best Way to Cross the Owner of a Crashed Ferrari F12: “You Can’t Park There, Mate”

5 Mike Is a Cheater and This Poor Mitsubishi Outlander Is Suffering Because of It
Car video reviews:
Up Next

A common response whenever owner or buyer dissatisfaction is registered is to vouch to never make use of the seller’s services again. It’s an understandable and justifiable reaction, but how far can you take it?

One disappointed Tesla owner from Finland has upped the stakes in terms of expressing dissatisfaction, by having his 2013 Model S blown up. Literally. He rigged it with 66 pounds (30 kg) of dynamite and placed a blow-up Elon Musk doll in the driver seat, and then had it explode. It was a spectacular stunt, shot and edited just as spectacularly, and it is available for viewing in full at the bottom of the page.

In their desire to deliver something new that would attract more viewers, content creators – influencers, we might as well call them – have resorted before to the practice of blowing up their cars or setting them on fire. Whatever loss is incurred by totaling the vehicle always goes down easier when the clicks are monetized, and revenue is increased if you can sell the right story. Like, for instance, framing your stunt into some form of protest.

This wouldn’t be the first time it happens, either. Both in the U.S. and abroad (even in Russia), we’ve had cases of apparently disgruntled or outraged owners who decided to trash their cars in protest. The protest was almost always to some form of misunderstanding or miscommunication with the manufacturer regarding costly repairs or replacement of parts. Like, if you can’t drive the car you paid for unless you paid even more money, you might as well get rich(er) by trashing it.

The idea seems strange to regular folks, all of us who rely on a vehicle for daily transportation, for work, and family life. But influencers are not regular folks, and most of the things they do are for show. Bread and circuses, like Roman poet Juvenal once said. Escapism is what we call it today.

This extended introduction was necessary to place the latest video of this kind in the proper context. Even though it seems slightly different, in that the owner appears more sincere in his actions, the high quality of the production, including the stunt and the resulting video, indicates that it was probably done for show as well.

The owner in question is one Tuomas Katainen, and the car to die the spectacular death is a 2013 Tesla Model S (hat tip to InsideEVs). Katainen says he bought it second-hand and that he only got to drive it for 1,500 km (932 miles) before errors began popping up and the car stopped functioning. He took it to a Tesla service and was told that the entire battery pack needed replacing, which meant he was in for a €20,000 ($22,480 at the current exchange rate) bill, because the warranty had expired.

Upset, Katainen took the Tesla to a disused quarry in Jaala and, with help from a team of experts and an even larger team of “volunteers,” rigged it up with dynamite and blew it up. Of course, there were cameras on hand to capture every second of it, including the moment a helicopter dropped a blow-up doll with Elon Musk’s face, and they laughed as they invited the Tesla CEO for a “drive.”

After the blast, Katainen says he believes he’s the first person ever to explode a Tesla on purpose, and that doing it was way more fun than driving the EV had been. The video also mentions that Katainen didn’t pay a single dime for the stunt, because several volunteers were willing to assist him in exorcising his rage against Tesla.

So, was this right? Is destruction of property, including one’s own, ever the right approach? Eh, it probably depends on how you look at it.

This was Katainen’s Tesla and, as such, he had every right to do whatever he wanted to do with it. But make no mistake, this was a show – and a well-orchestrated one, at it – meant to get him monetized clicks. Otherwise, he would have sold the Model S for scrap, promised himself never to give Tesla money again, and gone on with his life.

Instead, he chose to put on a performance. It’s a good-looking one, to be sure: the way the explosion was rigged and how it was filmed, the special lighting, the edit on the video (including the dramatic intro from the narrator), the spectacular drone shots, the helicopter “surprise” drop, it all served to sell the story. In fact, Katainen relied so heavily on visual cues that he didn’t even feel the need to tell the whole story of his trouble with Tesla.

That’s not to say that his actions weren’t justified or understandable. Just that sincerity would have been better appreciated, as idealistic as this might sound. 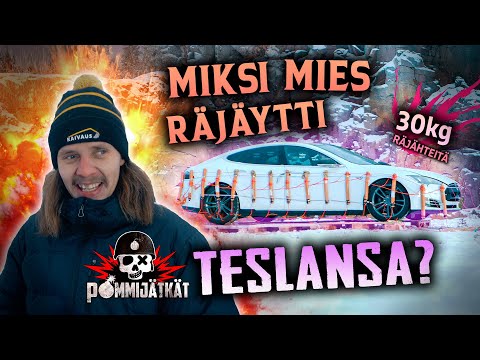