This was the firestarter of the electric car revolution.

It wasn't the ignition plug since it had none of those: only an electric motor and 4000 cells formed into a battery.

In the dawn of the XIX-th century, the battle between the electric cars and gasoline-powered ones, the latter prevailed. Fast forward a century, the things looked way different, and the American car-company Tesla came with a new idea. That was the 2008 Tesla roadster.

It took the lightest chassis on the market from a Lotus Elise. The little Roadster seemed perfect for the job. The bodywork was adapted. It was still sleek and aerodynamic, with a Targa-style convertible system. In the front bumper, Tesla installed a wide grille needed to cool the battery packs and the engine. Unlike the Elise, it didn't feature side-intakes behind the doors since there was no internal combustion engine to cool it.

The Roadster's interior was very minimalist. A dashboard, a pair of seats, an air-conditioning unit, and a sound system were all the interior equipment. Some metallic parts were still exposed, like in a Lotus Elise. There were even less sound-deadening materials since the electric motor was very silent, and there was no gearbox. The instrument cluster featured two analog dials with a tachometer that showed up to 13.000 rpm. A gauge showed the battery charging status.

The Tesla Roadster faced a few problems when it was launched because the transmission failed. After the problems were fixed and the little open-top vehicle proved its worthiness, the orders started to pile-up, and the waiting line began to be longer. The 0 to 60 mph (0-97 kph) acceleration time was under 4 seconds, and that was faster than any supercar from that era. 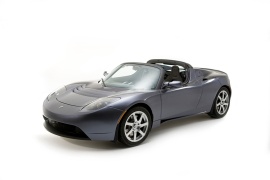