3 James Corden Stops Traffic Again, but No One Minds It Now That He’s With BTS

4 Tesla vs CNN: A Brooklyn Ride With FSD Beta and Very Frightening Results

5 Golf Cart Karaoke With The Rock Is Fun, Proof That James Corden Does Drive
Car video reviews:
Up Next

Fuel, Cars and Other Goods Transported Safely Thanks to Operation Sentinel’s Warships

Best Way to Cross the Owner of a Crashed Ferrari F12: “You Can’t Park There, Mate”

There are many ways to a man’s heart, but not one of them is by openly mocking his plight caused by crashing his supercar. The “You can’t park that there, mate” gag is back in full swing.
151 photos

A couple of years ago, one of the most British instances of dark humor gained worldwide attention when a banter-prone driver noticed a blue Peugeot in a ditch on the side of a country road. Noticing that the driver was alright, he proceeded to admonish him for parking there while making all sorts of hilarious inquiries into how he ended up there. “By driving,” he concluded at one point.

It looks like someone is still finding inspiration in that video if we’re to judge by this new one making the rounds. The Sun is reporting that it’s going for viral status on social media. This time, it’s not a cheap Peugeot that crashed, but a Ferrari F12, which seems to have spun off the road and into a bush on the side of it. The presumed owner is the bald dude standing beside it and clutching his head as he assesses the damage.


The person filming the video is a passerby, and his take on the owner’s plight is, “You can’t park there, mate.” The owner’s reaction is precisely what anyone else in this situation would utter, a very sincere and well-articulated “F**k you.” The video is short and overall not revealing, but it’s meant to be a glimpse into the absurdity of everyday life, with the undisguised hope for a shot at virality.

The hilariousness (or stupidity) of telling someone who’s crashed their car that they’re not allowed to “park” it there aside, do take the latest video with a grain of salt. Or several. As commenters are already pointing out, this screams “staged” from a distance, from the fact that there is no visible damage to the F12 despite the assumption that it ran off the road and crashed, to the vague feeling that the two men are acting – and not doing a fine job at it.

To put it bluntly, this is very likely staged for clicks. At best, the bald dude is not the owner of the crashed F12, and at worst, there was no crash of an F12, to begin with. Stranger things have happened in man’s (or woman’s) absurd quest for Instagram clout. Just this week, a rich Arab Sheikh had one of his bear cubs rip off the door of his Lamborghini Huracan Performante, but not before he loosened it up a bit so as to keep the damage minimal.

If this is fake, whoever put the stunt together needs to rewatch the original “You can’t park there, mate” video and take notes. *Please be advised that both videos below contain instances of graphic language that might offend. 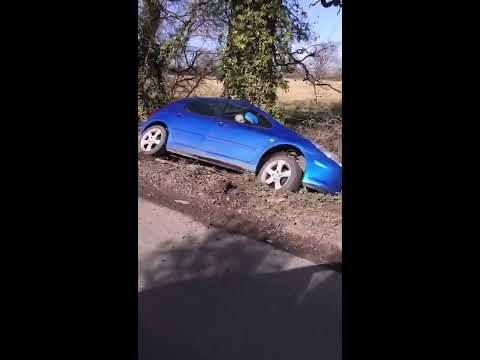