The pickup-truck was something familiar with the American car industry.

In fact, the most sold car in the world was the Ford F150, which was a pickup. That's why Tesla had to offer something on that market.

While the pickup-trucks started to be used more like leisure vehicles, most car-makers started to include luxury features on them. It was a switch from utility vehicle to family vehicle able to work or carry tents, motorcycles, ATVs, and pull trailers. Tesla said that they could build something better, and that was the Cybertruck.

The car looked like it was made from plywood and painted in silver. It was built from stainless-steel sheet-metal and fitted with bullet-proof windows. The entire vehicle was bullet-proof. But the Cybertruck must have been designed by the laziest designers in the world. Its lines and surfaces were flat, and, from the profile, it resembled the look of an F-117 stealth fighter. Apart from the wheels, there was no curved or round line on the entire bodywork.

The interior followed the exterior design with an angular-look for the seats and dashboard. The instrument cluster was a small, longitudinally-mounted display, behind a square steering wheel. Like the rest of the range, Cybertruck featured a big touch-screen display on the center stack. It offered enough room for five adults, with a flat floor for the entire cabin. In the back, the bed area was covered by a raked panel, while the tailgate was as conventional as possible for any car from its class.

Tesla knew that the customers would want to have more options for the cars, so it came with the idea to offer the Cybertruck with three power options that ranged from rear- to all-wheel-drive. 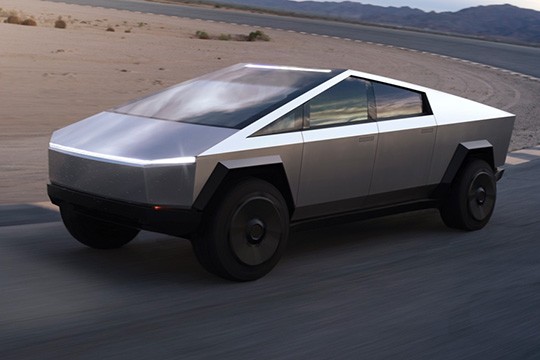