After a year from storming the market with the little Roadster, Tesla introduced an updated version: another roadster that could run for longer distances and was officially quicker.

Since Tesla was a small company, the chain of command was shorter. So, when Elon Musk asked the R&D department to change something, everything was done faster. There was no need for another ten accounting and five management links to start the development, and in less than a year from the first Roadster, Tesla introduced an updated version.

The designers heard what the market said about the Roadster, which was the complaints and what they had to fix. A new front end was drawn, with different styling for the headlights. Other subtle modifications were performed for the door-mirrors, which were too noisy for the first Roadster, and there was no engine to cover that aerodynamic whistle.

Elon Musk understood that a customer wouldn't pay big money for a car that won't give enough interior comfort, so it re-arranged the cabin. The designers hid the exposed metallic parts from the previous model, and there was more attention to details for the assembly team. The heated sport-seats were fitted as standard and featured inflatable lumbar support, and the leather upholstery was fitted as standard.

The most significant improvement to the car was for the engineering part. Better management for energy consumption and recovery increased the car's range up to 220 miles. As for performances, the little Roadster could rocket to 60 mph (97 kph) in 3.7 seconds. That was very quick for any standards. 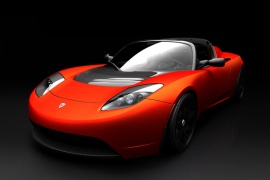