1 The Azure 3D-Printed Tiny Homes Are Made With Recycled Plastic, and They’re the Cutest

2 Meet Stevie, a 1970s Airstream Turned Into a Cozy Retro Retreat with an Outdoor Sauna

5 This Vintage Trailer Was Turned Into a Stylish and Luxurious Tiny Home in Mexico
Car video reviews:
Coverstory

Living in a tiny house on a permanent basis means downsizing in all aspects, having to choose and re-prioritize, and adapting to a more scaled-down lifestyle. But some things you simply can’t do without.

For musician Guillaume Tristant, the one thing he can’t do without is his music gear – though, in all fairness, he’s had to adapt it to his new home. Tiny houses are almost always beautiful and inspiring examples of creativity, modularity and multi-functionality, and Guillaume’s is no exception.

Located in Loire-Atlantique, France, it’s a very tiny and adorable mobile home that sits on a double-axle trailer and which, despite its diminutive dimensions, is able to offer a lot of functionality. It is also the star of the latest episode of the popular channel Living Big in a Tiny House hosted by Bryce Langston. You will find the episode in full at the bottom of the page.

Guillaume says he’s been living in his tiny for almost two years, and he’s made very few changes to it in that time. He doesn’t own the land he’s on and doesn’t pay rent for it; as he explains towards the end of the video, the laws in France are not exactly friendly to alternative living, but the mayor of the city is aware of his presence there and is letting him stay for a while. The cost of his move was the cost of the tiny, which he rounds up to €80,000 ($80,130 at the current exchange rate).

The tiny is connected to the grid through the nearest house, but Guillaume is striving to live off minimal resources – not necessarily because he has to, but because he wants to. He loves the idea of freedom of movement with all his possessions: like most tiny house dwellers, he doesn’t plan on moving every month, but just the thought that he could is “liberating.”

As for the tiny itself, it’s an awesome example of how much functionality you can squeeze out of such a compact layout. The tiny is 6 meters (20 feet) long, 2.5 meters (8 feet) wide, and about 4 meters (13 feet) tall, and features a standard layout with double lofts. It packs a couple of surprises, too: there’s a full music studio inside and, off the master bedroom, a balcony for two.

Everything is cut down to size, of course. When he had his tiny built, Guillaume was insistent on the idea of separate areas that would be perceived as rooms. Because he also wanted a certain nautical vibe, both boxes were checked by means of yacht-inspired elements: a striped curtain as a separator, a large porthole for a window, ropes for safety on the outer limit of the upstairs landing, and lots of wood.

The space is cramped, but far from uncomfortable. As you walk in, there’s the kitchen on the left-hand side, with only the basics, because Guillaume lives here alone and is not a passionate cook. He works as a software programmer and is also a musician and filmmaker, so his priorities were others. There’s a two-burner gas stove, a small sink, a small oven, a washing machine, and some storage space.

The bathroom is located in the center, and is as tiny as the kitchen. Still, it has a toilet and a small sink with vanity, and a shower, so in a way, it’s all you need to be minimally comfortable (and clean).

On the right of the entry is a double fold-down table with stackable chairs, doubling as the dining “area.” Then, you enter into the living, which Guillaume has converted into the music studio. The space was designed around his music gear, but it also includes a couple of shelves (one for books and one for CDs, because Guillaume believes in owning physical copies, not streaming content), two square bean bags that can fold out to form a bed, and a movie projector. Guillaume explains that downsizing was most challenging here, in the studio, than anywhere else in the house, because he had to rethink his gear and its placement. As far as energy consumption goes, he says the gear doesn’t require much. “The problem I have is with the oven… and winter,” Guillaume explains.

Upstairs is the sleeping area: the master bedroom above the living, and a one-person bed (another bean bag) in the smaller loft over the kitchen. The two are connected by means of a landing whose wall holds Guillaume’s collection of movie DVDs. Through one of the windows of the bedroom, Guillaume can crawl out on the balcony, to listen to nature and its calls at night.

Speaking of his choice of moving into a tiny house, Guillaume tries to correct some misconceptions about tiny house dwellers, but using his personal example. “We don’t want to live asocially,” he says. “We don’t want to live outside the society, we just want to live differently – not better, I did not say that.” While the eco-friendly aspect of alternative living is important, to Guillaume at least, moving into a tiny house was an “individual choice.” He believes laws should be changed to allow more of that. 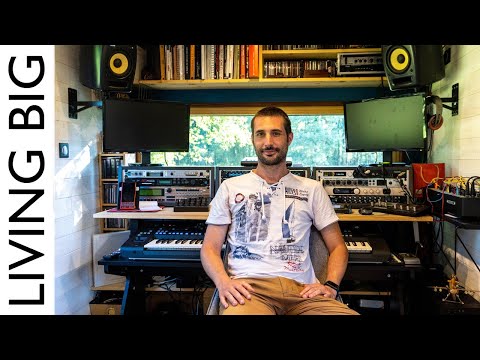