Acura Is On a Roll, Now Teasing All-New Stacked Interior Design for its MDX

Aurel Niculescu
New week, new Acura MDX Prototype teaser, it seems. Fortunately, the premium Japanese manufacturer is not going to stretch our patience any further than October 14th, when it will reveal the MDX Prototype in all its official glory. From there on, we’re just going to have to wait a little longer to see the fourth generation of the popular SUV.
8 photos

Acura’s flagship offering in the crossover range, the MDX, is just about ready to align to the company’s “Precision Crafted Performance” design language in a bid to become even more competitive in its segment.

Last week, when the brand outed the first teaser for the MDX Prototype, we first found out there are ample ambitions for the new iteration. An all-new exterior, for now styled in neon-brush touches - but still revealing enough to form an opinion.

Of course, the RDX influences are clearly visible, and the maker is also adding new touches to better suit the enlarged proportions of the bigger SUV.

Besides that, with the new teaser we are also getting the certainty that Acura has entirely revamped the cockpit as well. This time around the carmaker abandoned the CGI way and delivered the real goods – pictures with the actual interior of the prototype set for the virtual reveal next week.

The seven-seat interior is getting a fully reworked stacked treatment for the dashboard, with a tablet-style widescreen up top and several controls underneath eschewing the minimalist look of other models. Some will love this spaceship-like arrangement, others will call it cluttered.

Acura, on the other hand, is more preoccupied with telling us about the features and creature comforts, such as the open-pore wood, “hand-wrapped” leather with French stitching, or the “multi-mode front-seat massage functionality.”

It is also signaling the arrival of the Acura Precision Cockpit digital instrument cluster and of a 25-speaker Signature Edition ELS Studio 3D audio system that has integrated LED ambient lights. 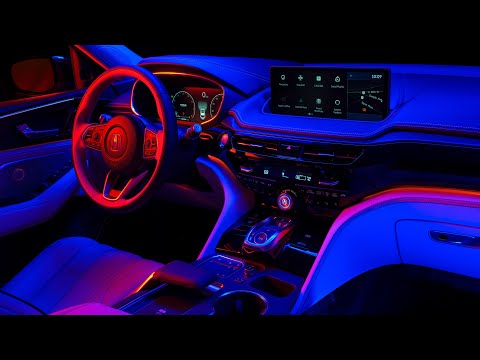