During the world financial crisis, CSX was the best-selling Acura on the Canadian market, and, in 2009, as a reward, it received a facelifted version.

Acura brought a revised version of the CSX lineup in 2009 and improved it in every way. It offered the same fuel-efficient engines, offered an automatic transmission, and, for those who asked for more performance, brought the 200 hp version.

For the 2009 model, Acura modified the front fascia and included the Power Plenum grille. In the same year, Honda revised the European Civic, but some changes didn't affect the North-American cousin. The CSX featured similar headlights as before but with clear lenses. In the back, the carmaker included a twin-exhaust pipe instead of the single exhaust system from its non-facelifted version.

Inside, the carmaker introduced the newest infotainment unit from the Honda lineup, which included a touch-screen on the center stack. It offered a navigation system on the same futuristic-looking cabin. The separated speedometer remained on the dashboard's upper side, while a smaller cluster placed behind the steering wheel displayed the tachometer.

Under the hood, Honda kept the low-powered version of its 2.0-liter engine for the standard and the automatic version but changed the Type-S. It gave it the K-series engine that was available on the European Type-R version. The 200 hp, naturally aspirated engine was paired to a standard 6-speed manual. The CSX Type-S was the car that made the Europeans cry since it was not available over there. Moreover, while the 3-door Civic Type-R had that engine, it featured a semi-independent rear suspension, while the Acura CSX featured independent suspension in all corners. 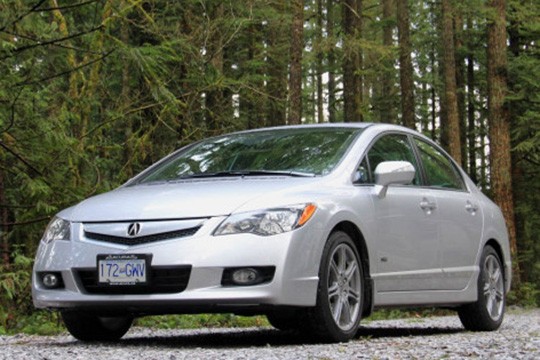