3 Opel Astra-e Plugs Into the Heart of Fantasy Land, Has the VW ID.3 in Its Sights

Home > News > Renderings
Aurel Niculescu
The Japanese automaker is making the rounds as of late with numerous interesting new additions. Thus, someone thought about combining the major ones into a single CGI entity.
22 photos

Toyota has made strides in shaking off that reliable yet old and decrepit image it once had. It did so also with ample help from its Toyota Gazoo Racing motorsport/performance sub-brand that not only wins big at the track but also has sporty road cars that hype the enthusiasm for the main brand like nothing before. So, they are already quite popular with winning titles such as the GR Yaris, GR Corolla, GR86, and GR Supra while the list is set to eagerly expand as soon as possible.

But what about Honda, could they take the recipe and hit the performance sweet spot with their legendary Type R nameplate? This is the question asked by the good folks over at the AutoYa info channel on YouTube, who just like other virtual automotive artists, are growing fond of the latest releases from Honda that could easily go straight after some hypothetical GR models.

So, they decided that we should “take a look at the first-ever 2024 Honda CR-V Type R, which is not even announced yet and may not ever happen, but” was still illustrated in a recent video that sits neatly embedded below. Since two of the latest introductions from Honda bode well for their CGI idea, the outlet simply combined the high-performance seventh-generation Civic Type R Hot Hatchback with the recently announced 2023 CR-V crossover SUV.

And, naturally, the first-ever Honda CR-V Type R would easily contend for the title of “most powerful & fastest CR-V” ever, with up to 400 hypothetical horsepower from various powertrain options: turbo, hybrid, maybe even a PHEV. Additionally, the channel also showed an entire digital color palette so you can choose your fashionable, sporty CR-V Type R… even in pink! 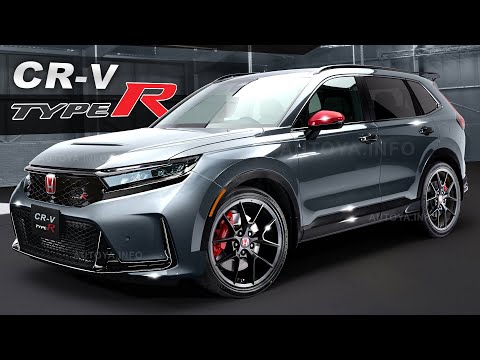