The second generation of the North-American version of the HR-V was introduced in 2022 as a 2023 model year and surprised its audience with its new approach and increased size.

Honda introduced the HR-V in some markets. The crossover was a novelty for those times since it was based on the same platform as Honda Logo, a small-sized vehicle. The second generation, introduced in 2013 at the North American International Auto Show, was based on the Jazz/Fit's platform. But then, in 2022, the Japanese automaker changed its ideas and built the second generation of the North American version of the HR-V on the Civic's platform. The same model was sold on the Chinese market and in several other countries and was also known as Honda ZR-V.

At the front, the angular headlights flanked a narrow, octagonal grille in the bumper. On the lower apron, a second air intake added more cooling surface for the engine. In addition, a pair of side scoops channeled the air around the vehicle to aid aerodynamics. From its profile, the sculptured door panels and the raised beltline created a dynamic image for the car. Moreover, the raked-forward C-pillars at the back emphasized the vehicle's sporty character.

Inside, the HR-V boasted a 7" digital instrument panel, while a 7" touchscreen was placed atop the center stack. A metallic honeycomb mesh stretched from door to door across the dashboard. At the front, the automaker installed a pair of bucket seats, while at the back, the occupants could sit on a 60/40 split-folding bench.

Under the hood, the 2022 HR-V received a new, 2.0-liter naturally-aspirated gasoline engine. It sent its power in all corners via a CVT gearbox. 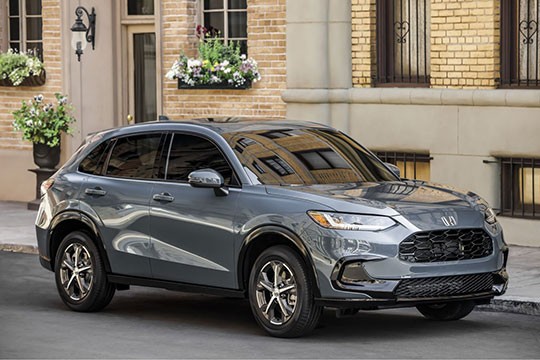