Honda introduced the sixth generation of its Civic Type R in July 2022 for the 2023 model year and heated up the hot-hatch segment once again.

With over 25 years of history, the Type R moniker always spelled an aura of a performance car dressed in civilian clothes. It was the car that could do a school run, a shopping day, and a day at the track without tearing a sweat. But, with the introduction of the sixth generation of this nameplate, installed on the eleventh generation of the Civic, the Japanese automaker finally combined the turbocharged engine with the independent suspension in all corners.

While its predecessor looked outrageous, with manga-inspired styling, and a huge wing on the back, the 2023 Type R looked less aggressive. Its front fascia showed the specific red H badge on the black grille, while the lower bumper received real side air-intakes that improved the car's aerodynamics. In addition, the automaker installed a functional scoop on the hood meant to draw cold air into the engine bay. Finally, at the back, Honda offered a big wing fitted as an option. It wasn't standard anymore and thus not present on any Type R.

Unlike its regular Civic sibling, the Type R featured sport bucket seats with cut-outs for racing harnesses into the tall seatback. In front of the driver, the carmaker installed a TFT screen, while atop the center stack, Honda placed a digital display. Unlike the regular Civic, the Type R received a gear stick on the center console.

Underneath the hood, Honda installed a reworked version of the same K20C1 inline-four powerplant featured on the fifth generation. Yet, the 2023 model year provided more power than its predecessor offered. Finally, like any other Civic Type R, this version was exclusively available with a six-speed manual. 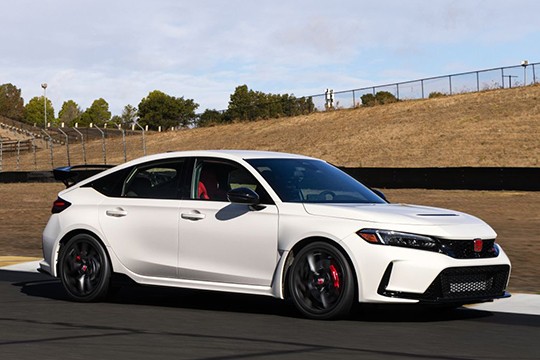