Honda introduced the 11th generation of the Accord for the U.S. market in 2022, and despite all odds, it made a downsize on its engine lineup, but in a good way.

The Japanese vehicle was already the best-selling car in America for more than five decades, and what started as a humble three-door hatchback became a favorite family vehicle. Unlike other carmakers from the same segment, the Accord always had a sporty side, but without being a true sports sedan, and that helped it sell in high numbers.

The 2023 Accord's front fascia resembled the one used for its smaller sibling, the Civic. Its grille featured a wide hexagonal shape, and the narrow LED headlights sported the daytime running lights on their upper side, like eyebrows. From its profile, the elongated silhouette revealed an arched roofline over the greenhouse. Honda kept the third side windows behind the rear doors, but the back of the cabin wasn't that sloped anymore and moved onto a more conventional, three-box-shape design. Finally, at the back, the 2022 Accord had corner-mounted taillights that were extended over the trunk's lid.

Inside, the Japanese automaker followed the same idea seen in the same era Civic, with a grille that ran across the entire dashboard. Atop the center stack, the Accord featured a standard 7" infotainment display with an option for a 12.3-inch unit. Fronting the driver, the 10.2" instrument panel was fitted as standard. Like on its predecessors, the bolstered front seats provided some side support. At the same time, in the back, the bench was capable of offering enough room for three adult-sized occupants.

Apart from the base version, powered by a 1.5-liter turbocharged gasoline unit, the Accord was also available with an improved hybrid system. The electrified versions were powered by 2.0-liter Atkinson-cycle engines paired with two electric motors. 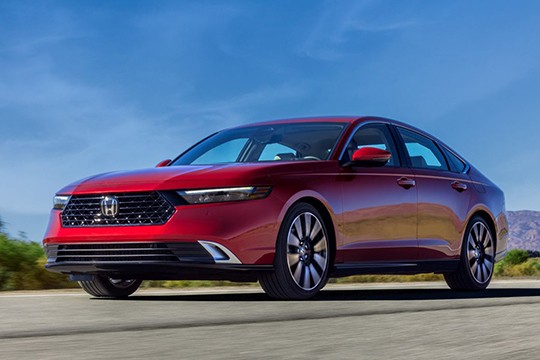