3 Hot Wheels RLC Exclusive Lamborghini Countach LP500 S Coming Up, Will Be Made to Order

5 Off-Road Capable Aero Lift Truck Is a Match Made in Toy Heaven for the Mazda CX-5 Speed
Car video reviews:
Up Next

The Hot Wheels Legends Tour is shaping up to be a brilliant marketing strategy for Mattel, as more locations are added each year. And with more locations, the influx of people bringing their cars over is also on the rise. The Hot Wheels collectors community is growing at an impressive rate, and the connection between the company and collectors has contributed to the growth for sure.

1973 Toyota Celica Is a Chevrolet at Heart, Wins the Hot Wheels Legends Tour in Canada

If you haven't heard about it before, the Hot Wheels Legends Tour is an interesting concept developed by Mattel. By taking part in these events, there's a chance that your car will be immortalized as a 1/64 scale Hot Wheels model.

Of course, competition is fierce as it seems that more and more people are fighting for the spotlight each year. The event has been going on since 2018 when Luis Rodriguez won the Grand Prize with his Custom 2 JET Z. Since then, the tour has added stops in other countries as well, and we can imagine that it's not easy for the judges to decide on a winner.

About three weeks ago, Atlanta was the host of the event. A 1968 VW Bug called "Hammerhead" rose above the crowd to secure a place in the Global Grand Final, which will be held on the 12th of November. About a week ago, there was a stop in Germany as well.

A tricked-out Volkswagen Puma GTE stole the show even though there was an impressive line-up of cars to choose from. Back over to the other side of the pond, another show took place in Detroit. A 1931 Dodge Rat Rod with a twin-turbo 5.9-liter Cummins Diesel engine left everyone in awe and was subsequently given top honors for the day.

On the 16th of July, residents of Windsor in Canada were eagerly waiting to see the cars that would line up for the event. The initial plan allowed for a total of 113 vehicles, but the organizers had to open up another 137 spots to fit everyone in.

The selection of vehicles was breathtaking, including cars of all shapes and sizes from all continents. One Subaru Impreza that showed up even had TH (Treasure Hunt) stickers on the side which is a neat little touch for any Hot Wheels enthusiast.

There were even several exotics on-site such as the Mercedes-Benz SLS AMG and a Liberty Walk Lamborghini Aventador. Even the world's wildest van showed up at the event. The Cosmic Cruiser is a 34 ft (10.36 meters) long van and it was built by artist Ivan Benic.

Needless to say, it would be hard to fit this in the regular Hot Wheels blister card. Some of the cars that attended the event looked mostly stock, while others were downright race machines. We've selected a few of the most interesting ones for you to see, but you can follow the whole gallery on official Hot Wheels channels.

Judges have a fixed set of criteria to help them decide on a winner: authenticity, creativity, and garage spirit. With that in mind, having the most powerful car in the show or the biggest one won't necessarily ensure victory.

For the Canadian event, judges voted for Kevin Huth and his 1973 first-generation Toyota Celica. After buying it off Craigslist, he initially considered swapping in a 1UZ V8. After discussing things with Edelbrock, he came to realize that there might be an even better alternative.

Fast forward to today, this old-school Celica is now an American at heart. The Chevrolet LS1 engine has been upgraded with all the right parts and is now up to a healthy 500 horsepower. The car was on display at the SEMA Show a few years ago, and we managed to find a video of Larry Chen talking to Kevin Huth about the build for you to enjoy.

On the 30th of July, Hot Wheels Legends Tour will be going live in El Segundo, California! By the looks of it, this stop will unfold at the Mattel Headquarters on 2031 E. Mariposa Avenue between 9 AM PDT and 1 PM PDT. 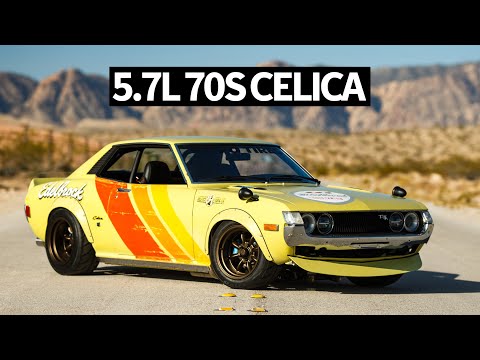