1 Hot Wheels RLC Exclusive Lamborghini Countach LP500 S Coming Up, Will Be Made to Order

Since the inception of Hot Wheels, billions and billions of these diecast vehicles have been sold around the world. And lately, it feels like more people are getting into the hobby. The official Red Line Club by Mattel can't keep up with the increasing demand, as even exclusive models are sold in the tens of thousands. So, if you can't get your hands on an RLC Hot Wheels, or a Super Treasure Hunt, there's only one thing left to do.
11 photos

A lot of collectors choose to start customizing their prized possessions, as it can be both relaxing and fun at the same time. Also, going down this road might lead to creating a unique item, without that big of a cost. The easiest upgrade you can do these days is to perform a wheel-swap.

There are plenty of online vendors where you can get wheels, and even Hot Wheels will sell you a pack. These days, 24 Real Riders wheels will set you back $20. But that's enough to upgrade six different cars!

Some people are skilled at tuning their 1/64 scale vehicles, and Tolle Garage has just unveiled a new project, too: the Ford F-150 SVT Lightning! Both the 'Tooned and regular versions of the truck were first introduced by Hot Wheels in 2003.

At first, it was presented as a lowered vehicle, part of the Slammed 2-Car set. After two more releases in 2004, Mattel took a long break from using this casting, up until 2020. You'll find that there are two slightly different versions of it: a more basic Mainline and a more detailed Premium.

Earlier this year, we saw the release of the Fast & Furious SVT Lightning with "The Racer's Edge" decals on the side. But the car that we're looking at today isn't a replica of the one that Paul Walker drove in the first movie of the franchise. Instead, it's a more common version that was released in 2021.

And that seems to be the golden recipe for any diecast tuner: start from a mainline, and make it look like a premium model. The process is split into four parts: stripping the car down, installing new wheels, repainting the car, and then adding the final details.

If you're determined to try this at home, there's even a complete list of tools required to operate. And if you happen to know your way around a workbench, you're bound to quickly master the secrets of the trade.

The theme for today is similar to the original F-150 SVT Lightning version from Hot Wheels: lower is better right? Taking the old paint off looks like a fun job, and customizing diecast cars could be an interesting topic for an Arts and Crafts class.

Three out of the six variations of the cars released in the past three years are red, and there happens to be a blue one too. But the Racing Blue paint job on the 5-Pack vehicle released this year is not even remotely as nice as the color used in this video. Plus, not having Hot Wheels decals on the front and sides make the truck look more real and that's quite important. 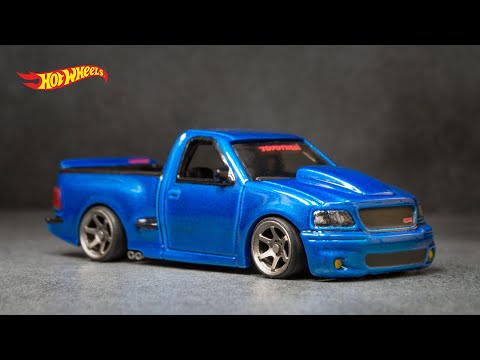