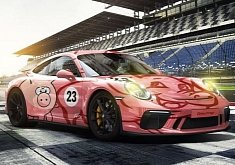 15 May 2021, 08:09 UTC / Steve Aoki and Bvulgari joined a "lit" collaboration to create the Bvlgari Aluminium Steve Aoki Limited Edition. The timepiece promises to light up your night.

29 Nov 2015, 09:03 UTC / Deadmau5 is one of the richest electronic music DJs in the world. He spends some of his money on cars, but it appears he still has to learn how to drive them

DJ Afrojack May Wake Up in a Bugatti Chiron Soon

22 Oct 2015, 13:38 UTC / Afrojack was seen driving all sort of exotic cars, even crashing a couple of them. If he buys the new Bugatti Chiron, we can only hope he won't crash this one

Deadmau5 Takes His BAC Mono Out in San Francisco, Calls It a Bad Idea · Video

3 Oct 2015, 12:49 UTC / Deadmau5 has waited for one year and a half to get his hands of this personalized sportscar, it's no wonder he's eager to drive it

Deadmau5 Takes Darude on a Ride with His Huracan: That Exhaust, Though

21 Sep 2015, 08:18 UTC / Deadmau5 sometimes takes his fellow celebrities for a joyride in one of his supercars. This time around, he drove his P1 with DJ Darude

Deadmau5 Is Going Green with His Tesla Model S P85D

13 Aug 2015, 15:45 UTC / Deadmau5, Joel Zimmerman on his real name, has a special something for customization. His latest project involves a Tesla Model S P85D

DJ Niels Houweling Gets His Jeep Grand Cherokee Mixed Up

3 Jul 2015, 14:11 UTC / When he took his McLaren P1 for a drift in the middle of the Nevada desert we knew Deamdau5 is not just the regular celebrity that likes expensive cars

Did Deadmau5 Mess With His McLaren Badge?

21 Jun 2015, 08:33 UTC / Joel Zimmerman on his real name, Deadmau5 is an electronic DJ that is also a great petrolhead. The problem is he has a tendency of messing around with his cars

8 Jun 2015, 09:16 UTC / Deadmau5 owns some of the greatest cars available on the market, but as opposed to most of the famous people he also likes to take them to the edge

22 May 2015, 15:10 UTC / Deadmau5 is a rich electronic music DJ that loves cars and cats. He bought a Lamborghini electric car for his pet recently and posed a picture of them online

12 May 2015, 10:04 UTC / Avicii is one of the world's most renown DJs currently on the market. The Swedish artist recently became Volvo's international Ambassador

29 Apr 2015, 08:45 UTC / When Deadmau5 decided to wrap his Ferrari 458 in a Nyan Cat look last year Ferrari demanded him to lose it soon after. This year things seem to be a bit milder

Deadmau5’ Tesla Model S P85D Is Here, and It’s Sitting Next to a Lamborghini Aventador

27 Apr 2015, 08:18 UTC / Deadmau5 is one of the biggest car enthusiasts in the industry, but being a DJ somehow made him understand the difference between driving and just buying autos

15 Apr 2015, 09:03 UTC / First he teases dealerships on Twitter. Then, he test drives them and usually films the entire adventure. Next thing you know, he bought the car