2 Deadmau5 Is Going Green with His Tesla Model S P85D

4 Deadmau5’s Lamborghini Huracan Is all About the Details

Deadmau5 Takes Darude on a Ride with His Huracan: That Exhaust, Though

With his fourth studio album on the shelves since late August, Finish electronic dance music producer Darude has enough time to check out the competition for a change. And since Deadmau5 is an artist with such a big heart (is he?) the two got together recently for a friendly chat and a long trip in McLaren’s hybrid hypercar Lamborghini's non-hybrid, but naturally aspirated Huracan. Later edit: it seems our minds were absorbed by all the powaaah - this is Deadmau5's Huracan, not his P1. So while the paragraphs below do suit the Mac hypercar sitting in his garage, this was not the one in question.
1 photo
As usual, Joel Zimmerman takes a while to get things started before actually hitting the road and starting the joyride. This time around, it appears the Canadian DJ forgot one of the codes for his internet connectivity, a problem he fixes later. The first thing all-petrolhead is clearly that exhaust sound only a 3.8-liter twin-turbocharged V8 petrol engine can make.

As we all know, the twin turbos boost the petrol motor at 2.4 bar to deliver 737 horsepower and 531 lb-ft (719 Nm) of torque. Combine that output with an in-house developed electric motor producing another 178 hp and 192 lb-ft (260 Nm) of torque and you’re driving a beast.

In theory, 916 horsepower may not sound as dramatic as say what Koenigsegg or Bugatti is offering, but we’re quite certain none of us would say no to the chance to ride along with it. Sure, the two also discuss random topics such as favorite Netflix shows, similarities between the Finish landscapes and the Canadian ones, or if Game of Thrones is a good show.

Spoiler Alert: Game of Thrones may have racked up a record-breaking 12 awards from its 24 nominations the other night at the Emmy Awards, but for some reason Darude still didn’t watch it.

Sure, they talk plenty of other stuff too, which we’re not planning to mention here. But if you are playing the 44-minute video rather for the petrolhead excitement, we say you should just concentrate on the sound of the car. Do that while looking through the window; you’ll realize what type of machinery we’re dealing with. Note to ourselves: Huracan. 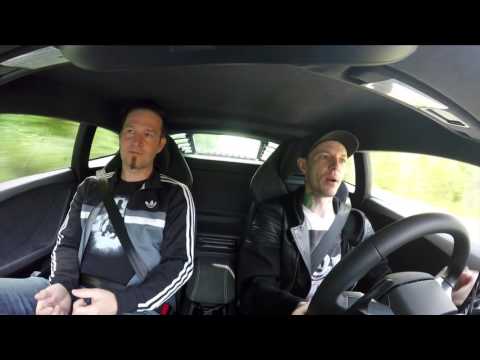