3 Deadmau5’ McLaren P1 Comes In, But the DJ Is Not Home to Take Delivery

People know him best as the big, speechless Game of Thrones character named Hodor, but the 39-year-old Northern Irish actor is also busy mixing music in his real life. And that is precisely what got him in Deadmau5’ Jeep Wrangler the other day when the two hanged out for a chat and coffee.
1 photo
When DJ meets DJ the wheels keep spinning we can tell you that. Sure, haters could go 50 shades of “meh” over the over 30-minute conversation between the two, but it doesn’t mean it’s not a great clip. We do have to admit, Zimmerman is quite cocky about his Jeep Wrangler’s enhancements. From the vehicle’s rear-end LED lights to that impressive roar, the Canadian DJ sure likes to point out how great the car is.

Kristian Nairn, Hodor’s real name, also seems to be quite impressed with the off-roader, especially for its spaced interior. “This is the only car I can even remotely fit in,” the Game of Thrones star goes.

At that point, Deadmau5 makes that Evil Knievel face and thinks they could switch to his McLaren 650s instead. Considering it’s a Spider, his guest will most likely fit in that one too once he’d take the top off.

Another funny part is when Joel realizes he left his wallet home so they won’t have any cash to buy coffee with. To be honest it rather looks like Deadmau5 is testing Hodor’s good will, but we all know the big fellow is a cool guy. Of course, he’ll pay for the coffee instead, even though the host should have been the one to do the treats.

If these didn’t convince you to watch the video, Hodor talking about his future projects, including a TV show and a “possible new season of Game of Thrones” sure will. Enjoy! 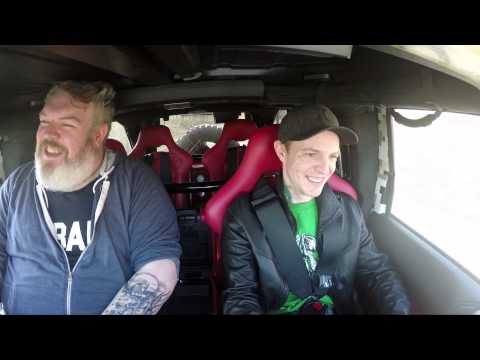