We all know that most manufacturers will completely stop building vehicles powered by internal combustion engines in about a decade from now. More changes are coming by the year 2050. So the question on everyone's mind is: when are governments around the world going to ban ICE-powered cars from driving on public roads?
6 photos

Some countries have already adopted laws that will most likely push people towards giving up on their diesel or gas cars anyway. The last people to still be using these vehicles will most likely be hardcore petrol heads and older people that are more resilient to change. But when the day comes and the last non-EV is banned for good, what will happen to all the cars that aren't running on batteries?

The most intelligent solution seems to be a full electric conversion. And there are already companies popping up that offer that kind of solution. However, the cost is still somewhat prohibitive. You can expect to spend as much as $30,000 for converting a Mazda MX-5, for example. But if your car is only worth a few thousand dollars, you're not going to be eager to go for that kind of swap.

But EV tech is advancing year after year, and that cost is bound to go down. If you're thinking about starting a business, an EV-conversion company might just be a good project for the future. So far, most people who are thinking about doing such a conversion will probably turn to a Tesla motor. But Ford has decided to join in on the action by launching its first-ever electric crate engine: the Eluminator.

This is the same kind of engine you'll find on a Mustang Mach-E GT, but there are two of these in Ford's new vehicle. The name might fool some people into thinking about the Aluminator crate engine, but the only connection between the two is that they're both made by Ford. The Eluminator weighs in at 205 lbs (93 kg), so it's quite light. Peak performance figures reveal 281 horsepower (210 kW) and 317 lb-ft (430 Nm) of torque.

These engines are now available for purchase and will set you back $3,900 each. But you should be aware of the fact that the package does not include a traction inverter, a control system, or batteries. Ford is launching this new crate engine at the SEMA Show in Las Vegas, and it will be powering a 1978 Ford F-100 Pickup! This electric Restomod was built in partnership with MLe Racecars, and it opens up a whole new world of options for custom vehicle builders.

Switching to an electric engine might take away some of the characteristics we've grown to love over the years, but it does have some benefits too. I imagine that in a few years from now, we'll be seeing more and more of these builds. People are bound to start using dual-motor setups for increased performance. But what most people will probably be looking for is the same kind of engine setup that's found on the Mach-E 1400! Granted, that's bound to cost a lot more, but it will surely provide more smiles per gallon. Or should I say more smiles per kWh? 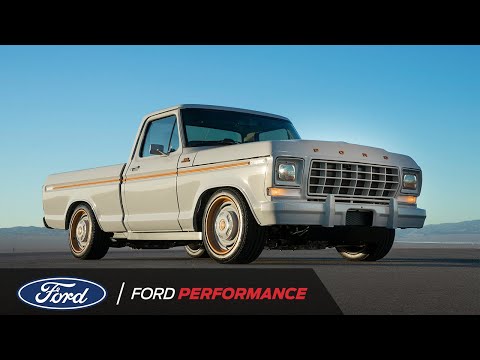