1 The 2021 Ford Bronco Is Better Than a Jeep Wrangler, Says Vehicle Virgins' Parker

5 I Hate Crossovers, But I’ve Been Living With a Jeep Renegade for the Past 3 Years
Car video reviews:
Coverstory

The GT is the Ford Mustang Mach-E for you if you want both space for the family and more than adequate performance. According to Doug DeMuro’s infamous Dougscore, this variant is the perfect contender for the best-selling Tesla Model Y Performance, thanks to overall scores of 68 points.
19 photos

There is, however, a problem with the range-topping version of the Mustang Mach-E. Not only does it start from $59,995 excluding taxes and options, but if you specify the Performance Edition, the price goes up by $5,000.

That’s a tremendous grand total for a vehicle in this particular segment, which is why the Ford Motor Company was inspired to drop the Blue Oval badging in favor of the pony we all know and love from the ‘Stang.

Speaking of which, the S650 generation that’s due to arrive in 2022 as a 2023 model may receive hybrid versions of the EcoBoost four-cylinder turbo and Coyote lump. As ever, Ford will make the new pony at the Flat Rock Assembly Plant, where just around 2,420 employees work today.

Turning our attention back to the Mustang Mach-E GT, the white-painted example reviewed by Doug carries a total retail price of $63,885. That kind of money is plenty enough for a brand-new Dodge Challenger Hellcat or a 2022 Chevy Corvette Stingray in their most no-frills specs.

DeMuro also makes a case for pretty decent value in terms of pricing and worse value overall compared to a Model Y Performance. The closest rival starts at $61,990, which is more than a Mustang Mach-E GT because you get better acceleration (3.5 vs. 3.8 seconds) and better range (303 vs. 270 miles). The Performance Edition is listed by the configurator with 3.5 seconds to 60 miles per hour (97 kph), but the range dives to 260 miles.

The Ford Mustang Mach-E also wins the styling battle, according to DeMuro, who is most impressed by the driving characteristics. “This car is a better drive, period,” highlighted the reviewer. “I would rather give up three-tenths of a second and get what this car offers, which is great handling.” 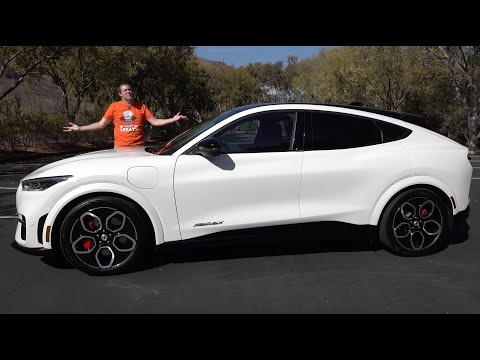