The 2021 SEMA Show is kicking off in Las Vegas, and here I am thinking: "Why on Earth hasn't someone come up with the concept of a 1/64 scale replica of the event?" There are plenty of diecast tuners working on some highly exciting projects these days. The creative level for most of these rivals that of what 3D artists are putting out.
16 photos

This isn't the first time that the guys at Jakarta Diecast Project have awed the world with their miniature project cars. The last time they had our attention, they had just finished working on a Volkswagen Beetle race car featuring Porsche elements. Since that moment, they have been quite busy showing off cars like the Chevy Panel lowrider, the Mercedes-Benz Speedster, a BMW E46 Wagon, a Mazda Repu Drift truck, and a Pikes Peak Hill Climb Honda CR-V.

If all these cars would have been built for real, not as diecast replicas, that would have been enough for an exciting SEMA booth. And it just goes to show that tuning doesn't have to be only about road-going vehicles. You can tune a diecast vehicle in a way by changing several elements, including wheels, bodywork, and other details like the engine, seats, and paint job.

And that's just what these creative people have accomplished with their newest project: a Hot Wheels Mazda RX-3. This was already a pretty cool scale car, to begin with, but almost anyone can get their hands on one. So the only way to make it more special is to start tinkering with it. Tearing the car apart was the first step of the process. The standard mainline wheels just had to go, they're not fit for a project of this scale.

The new "aftermarket" wheels represent a dramatic improvement over stock, and it's amazing how much effort people will put into building these miniature replicas. Removing the paint is the next step along the way, and then it's time for some extensive bodywork. Most people might dislike the idea that this RX-3 isn't going to keep sporting a rotary engine. Instead, the builder has decided to go for a Honda swap.

But instead of using one B18 engine, he's going for two of them, one in the front and one in the rear. By the looks of it, these hand-built engines are using individual throttle bodies, which means they are naturally aspirated. In stock form, one of these should be good for just about 200 horsepower!

With AWD this RX-3 should be a lot easier to drive, albeit it might feel a bit savage. The new paint job consists of a mixture of green and orange and the stickers reveal the Jagermeister theme planned from the beginning. Painting the headlights is crucial if you want to make the diecast replica more real-life like and I must say that the outcome has a sort of Liberty Walk vibe to it! 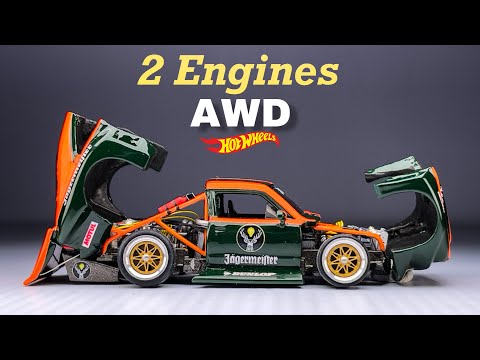