3 1970 Ford Mustang Hides a Shelby Secret, Feels Like the Perfect Mix of Old and New

There's always a bigger fish. Remember that when you're bragging about how fast your Ecoboost Mustang is. The guy you're talking to might have a Mach 1 in his garage. And if it just so happens that you're the Mach 1 owner, be sure that you may bump into someone who drives a Shelby GT500. But it doesn't end there, there are scarier cars still.
7 photos

When Shelby introduced the GT350, everyone was happy to see that it had a third pedal inside. It felt like the ideal track car, perfect for anyone looking to push the limits of the Voodoo engine and the Mustang chassis. But not everyone is into going fast around the corners. Some people just want to go as fast as possible down the quarter-mile (402 meters). And I'm sure there are plenty of people that bought a GT350 with the intent of drag racing it.

If you're looking to upgrade your Shelby GT350, then the people over at FatHouse Performance in Indiana have got quite a few options for you. How far you go with it depends on your budget or your desired outcome. The 600R Flex Fuel package is the company's entry-level choice, which can get you up to 530 horsepower at the wheels when running on E85. Take things up a notch and opt for the supercharged 700R if you'd like to have 650 whp.

But if you want to gap your friend's Shelby GT500, think about their 800R upgrade. You can either go for a supercharger or a twin-turbo system, but both will take you up to 800 whp. Just don't be surprised at the fact that the twin-turbo one is about $10,000 more. Some people will say, why stop here? After all, don't you want what's best for your car? Is 800 whp going to be enough to hold off a Demon?

Having to face that kind of doubt can be nerve-racking, so why not go all the way up from the beginning? The most capable package you can get for your Shelby GT350 is called the 1400R. This is going to get you up to 1,400 whp on E85 or race gas, but it's not going to come cheap. The company hasn't even mentioned the price for this package, although the lower 1000R variant will set you back $59,999.

FatHouse Performance guarantees that with the 1400R upgrade and the drag pack, you'll be getting 8-second runs at the drag strip with ease. But one of their most recent projects has done even better than that. In 2018 this exact car was labeled as the most powerful GT350 in the world when it was still at 1,143 whp. In 2019, in full street trim, this car could do 8.6-second passes. But the owner wanted more.

Having a manual gearbox was kind of a setback given the application, and so the decision was made to bring in a TH400 transmission instead. Now, after 4 years of continuous development, this Shelby GT350 has reportedly set a new world record: 7.58 seconds for the standing quarter-mile run, with a trap speed of 187 mph (300 kph)! That's more than enough to crush a 1,914 horsepower Rimac Nevera, which has a record of 8.58 seconds at the drag strip, albeit on street tires. 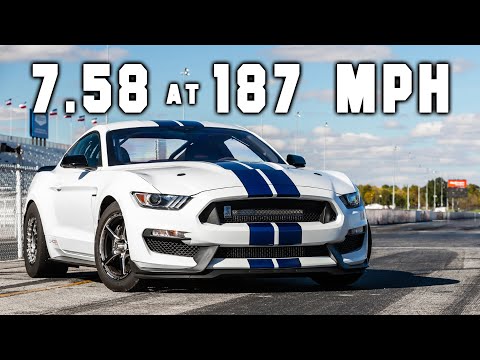