One month after it introduced the Ranger, Ford brought the new generation of the Everest on the market, replacing its seven-year-old predecessor.

Ford was highly successful with the previous generation of the Everest and followed the same recipe for the 2022 model. Thus, it carried over the chassis and the drivetrain from the Ranger and then added a modified bodywork on top of that.

At the front, the 2022 Everest featured the same front fascia as its pickup sibling. Thus, it carried over the C-shaped daytime running lights and a massive grille adorned with chromed elements. In addition, the lower bumper sported a pair of fog lamps and two recovery hooks. But, unlike its Ranger sibling, the Everest received a fully-closed bodywork. Thus, from its profile, the long roof was extended behind the rear seats. By creating a raked-forward D-pillar adorned with a chromed trim, the automaker managed to hide the SUV's utilitarian roots. Finally, at the back, the taillights were extended from the quarter panels onto the tailgate and were visually connected with a chromed slat that sported the Everest nameplate.

Inside, the Everest carried over Ranger's dashboard that featured a generous infotainment system placed atop the center stack. Also, the instrument cluster was fully digital, with a rectangular display in the middle flanked by the speedometer and tachometer on separate TFTs. Depending on the trim level, the Everest boasted a leather-wrapped interior for the higher grades, while the base models were offered with cloth upholstery. Its seven-seat capacity transformed the Everest into a sought-after vehicle, and Ford kept that attribute.

Under the hood, Ford announced a V6 turbo-diesel developed with Volkswagen. The base version, on the other hand, was powered by a 2.0-liter bi-turbo oil burner. Both versions sent their torque in all corners via a ten-speed automatic transmission. 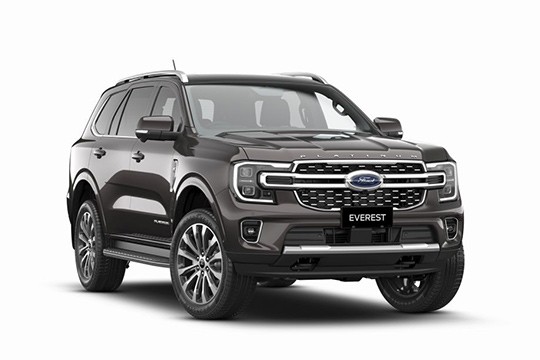