3 The Story of the Audi RS 002, the Mysterious Prototype that Ken Block Just Hooned

Ken Block is living the dream! A dream he has been working on for decades now, and by the looks of it, the only way is up for him. His partnership with Audi is shaping up to be quite impressive, and with SEMA just around the corner, he's dropped a teaser for what's about to come. He's now got two more Audis in his garage, and there's also a third one in the picture.
16 photos

Ken Block has been full of surprises these days. Probably the least exciting of news is the fact that he's just added an Audi RS e-Tron GT to his garage. This comes as a natural move considering his relationship with the German manufacturer, and we'll probably be seeing a lot of content revolving around this car in the upcoming months. As if having the fastest production Audi ever built in your garage wasn't cool enough, he's also going to fit it with a set of Rotiforms to make it even better.

But, as mentioned before, this isn't the most exciting news he's got planned for the world. He's made it clear in his previous outings to Germany that he has always been a huge fan of the Audi Sport Quattro. He got to drive one while he was there, but he took things rather easily. Some people rushed to conclude that it's a shame he didn't get his way with the car, but fret not; he had a plan all along.

Because tomorrow he will be debuting his brand new 700 horsepower Sport Quattro "Turbo Monster" replica at the Toyo Tires booth at the SEMA Show. The car bears Walter Rohrl's signature as well, and it's, of course, powered by a turbocharged inline-5 cylinder engine. Oh boy, oh boy! Some noticeable details included are the Rotiform wheels, the Hoonigan hydraulic hand brake, a set of Recaro seats, and what seems to be a fully-carbon fiber dashboard.

There is no doubt that Ken will be doing some serious tire slaying in this car over the next few months. Even though we might not get an actual Gymkhana video with it, there is no chance on Earth that this is going to be a garage queen. The SEMA reveal is going to be made better by the fact that Hoonigan team member Brian Scotto is also going to show off his dream Audi. Of course, we're talking about a 1990 Audi Coupe Quattro, a car that he's owned for 17 years now.

This car will be used for hill climb racing, but we wouldn't be surprised if it also makes an appearance at the drag strip for the "This vs that" series. The only question now is: what kind of an Audi is Ken Block going to be driving in the next Gymkhana movie? It's bound to be an electric vehicle, we've already seen a 3D Artist doing a guest mock-up, but will they be announcing this project at SEMA, or is it going to be kept under covers until next year? At least we can be happy that he hasn't completely forgotten about his first true love: the internal combustion engine. 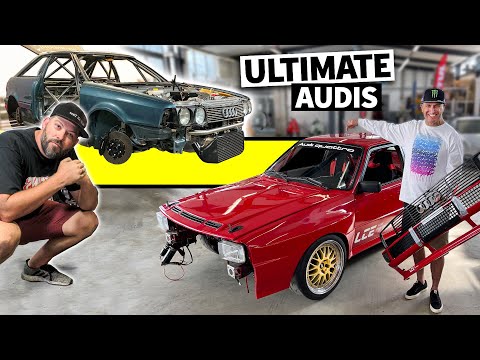