5 Lamborghini Murcielago LP640 and Ferrari 360 Modena Do a Rev Battle
Car video reviews:
Up Next

Mysterious Android Auto Update Shows Up Totally Out of the Blue

Lamborghini currently has one of the biggest model ranges in its history, with four models – Huracan, Aventador, Sian, and Urus overlapping in production. That’s quite a lot for a manufacturer known for its very low production quota, with exclusivity being a big part of its allure.

Urraco Turned 50 This Autumn, a Lamborghini That Shouldn't Be Forgotten

Well, it’s not like the Sant'Agata Bolognese-based Italian carmaker hasn’t tried time and again to expand into more affordable territory. And it did that from the very beginning, back when the Miura was taking over from the 350 / 400 GT and was joined by models such as the Espada, Islero, or Jarama.

Quite contemporary with them – well, at least some of them – was our subject for the day: Urraco, a model that just celebrated its 50th anniversary this very October. It was presented to the worldwide audience at the 1970 Turin Motor Show as a 2+2 coupe with a design penned by the legendary Marcello Gandini, (he was at Carrozzeria Bertone during that period).

Interestingly, the model was produced in just 776 units (520 examples of the P250, 66 of the P200, and 190 of the P300 model) starting from 1970 and ending no less than nine years later – that is less than 100 vehicles per year, on average. Still, we can consider it contemporary with the Miura, Espada, Jarama, Countach, and the Silhouette.

Why is that important – well, let’s just say that it lends additional credence to Lamborghini's decision at the time to expand into a more affordable zone of the high-end sports car market. Instead of being just another generic supercar, the Urraco aimed to strike a chord with customers looking for something else other than a Ferrari Dino or Maserati Merak.

More so, the legend claims the Urraco was conceived at the behest of none other than Ferruccio Lamborghini itself, who apparently wanted to expand the company’s production and deliver a “Lamborghini that would be accessible to a wider, albeit limited, public.”

According to the Italian manufacturer, the Urraco also premiered a few innovative technical solutions at the time – as imagined by Paolo Stanzani, then Lamborghini Chief Technical Officer. For example, the Urraco, a 2+2 coupe with a midship rear mounted V8 and an independent suspension, had deployed the MacPherson strut system both front and back.

That was a first on a production car at the time, and other interesting features were used in the model’s 2.5-liter V8 engine, as well. The Urraco’s 220 hp enabled a maximum speed of 245 kph (152 kph), and the mill had a novel distribution system using a single overhead camshaft per bank along with the interesting “Heron chamber” engine head.

Just 4.25 meters (167.32 in.) long, Lamborghini’s Urraco was a sight to behold not just from the exterior – but also when reaching the odd interior, with its quirky dish-style steering wheel and uncommon placement of the instruments panel.

When first introduced, the Urraco carried the P250 designation – the letter standing for the rear (“posteriore” in Italian) placement of the engine, while the numeral designated the capacity of 2.5-liters. This variant was produced between 1970 and 1976, while a lesser P200 variant presented in 1974 specifically for the home market (2.0-liter, 182 hp) was manufactured in very low numbers from 1975 to 1977.

As is customary, there was also a higher-powered version available for the final few production years – the P300 lived between 1975 and 1979, with its 3.0-liter 8-cylinder packing 265 hp. The model carried its legacy further down the line, as the Silhouette and Jalpa were both based on the Urraco.

Fun fact – the Jalpa was Lamborghini’s entry-level sports car for the crazy 1980s and was introduced at the 1981 Geneva Motor Show alongside the LM001 off-roader concept. Thus, the Jalpa was Lambo’s final V8 model before the arrival of the Urus – which is the SUV spiritual successor of the LM002.

By the way if you want to check out some interesting facts about the Lamborghini Urraco, the Wheeler Dealers’ YouTube channel recently brought up that moment when Mike Brewer purchased a green example for Edd China to happily tinker (he completely refurbished the engine) away with.

Do we need to add the fact that Lambo’s Urraco (featured in season ten) turned a nice profit for the car trader / expert mechanic team and was afterwards voted as the best restoration ever featured in the show and it’s rumored to have even taken part in a special parade in Italy that marked the 50th anniversary of the model? 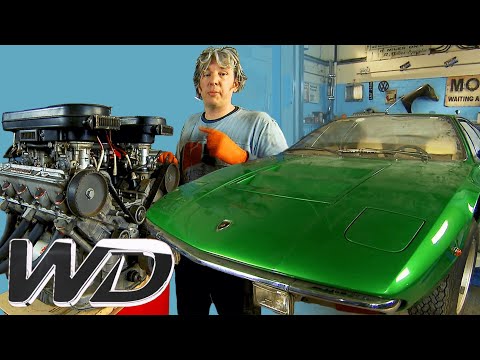