1 Volvo XC20 All But Confirmed With Electric Power, to Feature New SEA Platform

Anyone who visited London remembers a few landmarks – among them the Buckingham Palace, the funny bearskin headgear, the London Eye, the Tower Bridge, or Madame Tussauds creepy wax museum. And, of course, nobody will forget the motoring icons – the double-decker bus and the Black Cab.
10 photos

Because we live in a world of constant change, the latter two have embarked on a modernization process over the past years, with the London-dwelling red busses switching to hybrid and even fully electric powertrains.

The world’s first all-electric double-decker buses were made by Chinese company BYD, and another local rival also took charge of taking the renowned London taxis into the 21st century. Geely’s London EV Company (LEVC) is the current builder of the ubiquitous “hackney carriage,” so it’s easy to understand why its TX range-extended electric model became the basis of an interesting luxury build.

Clive Sutton, a London-based retailer of luxury vehicles, through its Sutton Bespoke division, has announced the production start of a limited-series of taxis called Sutton VIP Class LEVC. While on the outside it looks about the same as any other current LEVC TX, inside it’s like dealing with the Rolls-Royce of taxi cabs.

After a few weeks ago they showed the pilot unit of the project and positive social media response was doubled with a private customer sale of the prototype, the coachbuilding specialist decided to amend some other examples of the LEVC TX.

All of them will feature a fully customized interior, angled rear seats clad in Sandalwood leather and Alcantara trim, hand-crafted wood veneers on the door cars, thick carpets (instead of rubber) on the floor, and a panoramic glass roof. That’s not all, because customizable ambient light sets the mood, and there’s even a TV tuner with Apple TV, as well as a Sony PS4 game console.

The driver gets the same luxurious treatment and a digital environment to make work easier, while on the outside the “Taxi” sign has been replaced with VIP lettering and the bodywork features a two-tone paintwork of Black for the lower areas and Ferrari-inspired “Grigio Silverstone” for the upper portions. The pricing matches the new aspirations, Sutton touting a starting base of around £100k (excluding VAT) / $129k. 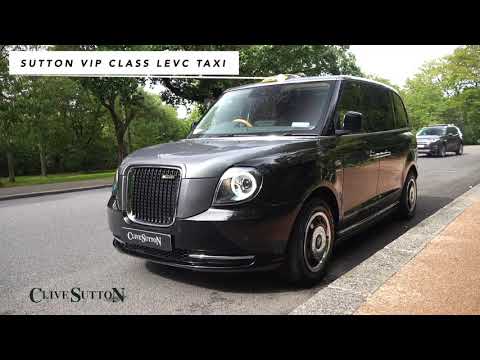