The three letters from the Hurracan STO came from the Super Trofeo Omologata, which meant a road-legal super sports car developed on the track.

Lamborghini was one of the greatest carmakers who found a way to offer the same car at various performance levels. Moreover, apart from the factory's management, nobody knew exactly how many new versions would be for the same car. But it wasn't just some posh on the wheels and a new badge on the dash. The STO, for instance, was fierce and competitive. It was the fastest Lamborghini to date.

The Italian carmaker took its inspiration from the motorsport arena, where it ran the Lamborghini Trofeo race. It was noticed that it was a very good idea to install a single bodywork element that will comprise the hood and the front fenders, so they did that for the SFO and named it "cofango". That allowed them to create new air-ducts on the front hood to increase the airflow through the central radiator and improve engine cooling as well as helping generate downforce. The cofango also incorporated a new front splitter, directing airflow to the car's newly designed underbody and to the rear diffuser. In the rear, there was a new air-scoop to improve the cooling.

The Hurracan STO interior reflected the lightweight concept of the exterior with the extensive use of carbon fiber throughout the cockpit, including carbon-fiber sport-bucket seats wrapped in Alcantara. Carbon-fiber floor mats replaced the carpets, to reduce weight. Behind the seats, there was a high-grade titanium alloy arch with four-point seatbelts.

Lamborghini installed an upgraded drivetrain and offered the Hurracan STO with a 640 hp V10 engine. It was paired to a 7-speed automatic (dual-clutch) gearbox, which sent the power to the rear wheels. 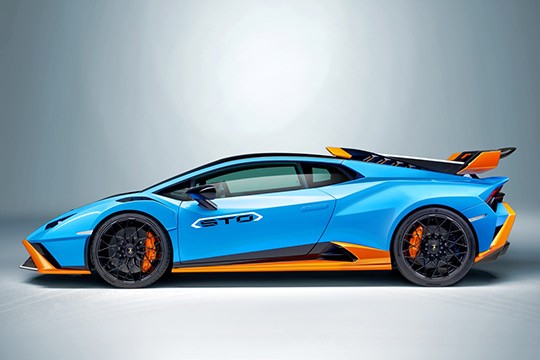 3 The Lamborghini Aventador Is Dead, Long Live Its V12-Powered Successor!

4 Lamborghini Reminds Us Of Its First Commercial Success