5 Lamborghini Goes for a Personal Splash of Clubbing With Urus Graphite Capsule
Car video reviews:
Up Next

We had to give away the result from the get-go because there’s an interesting twist to the RSQ8 versus Tesla Model X P100D Ludicrous story, and it’s not making a case for the California-based automaker. Still, it was quite predictable that a modified RSQ8 would have the upper hand against two stock vehicles – even if one of them is an instant-torque EV monster.
35 photos

Drag races, some of the most popular forms of testing your vehicle’s performance against both your driving skills and other people’s cars, are straight-line affairs. There’s no denying that. So, it’s always interesting when the models involved add a twist – whether they do it consciously or not, as is allegedly the case on this occasion.

So, the YouTube channel DragTimes decided to feature in their latest episode a newly tuned Audi RSQ8 that’s nicknamed “POORUS” by its owner, against a couple of very capable SUV contenders in stock format. By the way, to substantiate its modded claims, the RSQ8 even underwent dyno testing, coming out with a maximum of almost 697 horsepower (check out the readings in the gallery).

First up for the drag race was its platform brother, the way more expensive and marginally more powerful Lamborghini Urus. The interestingly camouflaged RSQ8 was actually not the first off the line in this race, but it nevertheless caught up and ended winning – albeit with a very close result.

But it wasn’t meant to be, as both races saw the RSQ8 destroy the times achieved by the Tesla. You can check up the exact times and trap speeds in the attached gallery and the video embedded below, and we can tell you the gap was massive – and allegedly completely abnormal.

As it turns out, the Tesla Model X owner’s previous best drag racing time (11.281s at 118.37 mph) should have made this battle fair and square, instead of providing mid-12s times and trap speeds that didn’t even manage to reach past the 100 mph (160 kph) mark...

According to the DragTimes host, this was not the first time the Model X raced, it had a good state of charge (90%), the driver knew what he was doing, and the SUV only had around 27k miles on the odometer. Interestingly, the explanations (starting at the 7:05 mark) also include some of the conversations the owner subsequently had with Tesla representatives, and the answers on their part are quite... odd, to say the least. 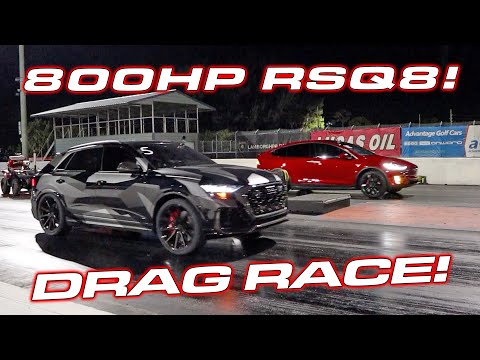