Audi didn't waste its time when it introduced the 2022 Q8 and unveiled a sportier-looking version as well, named the Q8 Sportback e-tron.

Apart from the SUV-shaped Q8 e-tron, the German automaker also introduced the Sportback, which was almost the same car but with a different shape. Moreover, this version targeted customers that didn't need that much trunk space and were mostly focused on the vehicle's look.

Like its Q8 e-tron sibling, the Sportback featured a similar front fascia with the same signature light. Yet, the side scoops on the lower bumper were taller. But the most significant difference was on the side, where the roof sported a sloped-down shape towards the raked-forward tailgate. Moreover, the carmaker added a lip spoiler on the trunk's edge.

Inside, the Q8 e-tron boasted a luxurious cabin covered with Dynamica microfiber made from recycled materials. At the front, the carmaker installed bolstered seats for the entire range, with an option for leather-wrapped sports seats. Like any other high-tech vehicle from its era, the Q8 e-tron featured a digital instrument panel. At the same time, on the center stack, the carmaker added two touch screens for the MMI infotainment system. The upper one boasted a 10.1" diagonal, while the lower one was of 8.6-inches. But the most significant difference was for the rear seats, where the headroom was smaller than on the regular Q8 e-tron. Moreover, the Sportsback's trunk offered just 528 liters (18.6 cu-ft) of space instead of the 569 liters (20 cu-ft) provided by its sibling. In addition, the frunk added 62 liters (2.2 cu-ft) of storage.

The drivetrain consisted of a dual-motor system that provided 300 kW (402 HP) and 664 Nm (490 lb-ft) of torque sent in all corners. Audi installed a standard air suspension for all trim levels to keep the car planted on the road. 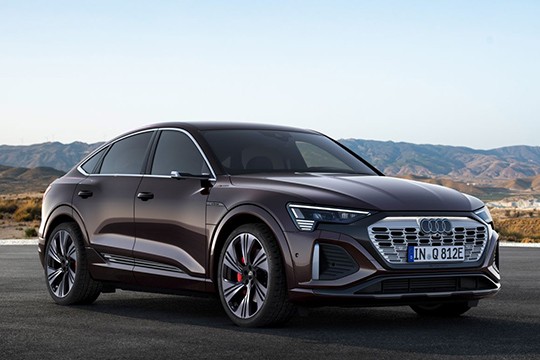