Sergiu Tudose
This past weekend, a high number of supercars attended the Petrolhead Spring Event at Airport Twente, where people got the chance to witness a bunch of good old fashioned quarter mile battles, featuring all sorts of vehicles, from exotics to fast saloons and even fast SUVs.
7 photos

From what we can gather, at least in accordance with this video, the car to beat over there was a modified Lamborghini Huracan Performante, featuring a Twin Turbo GTX35 kit courtesy of Klasen Motors. Instead of its usual 631 hp (640 ps), this Performante put down an alleged 1,050 hp.

Make no mistake, the Huracan is plenty quick even without any mods, and we’re pretty sure it would have won most of its duels anyway, apart from that first one against the Porsche 911 (992) Turbo S. We’ve seen the Porsche destroy Lambos of all shapes and sizes, and the Huracan Performante is nowhere near powerful enough to hang with Porsche’s flagship supercar.

When stock, the Performante’s 5.2-liter V10 engine also produces 443 lb-ft (601 Nm) of torque, while the weight of the car itself has been dropped (compared to a regular Huracan) by 88 lbs (40 kg) courtesy of the forged carbon fiber and aluminum body components. To be fair, this car was optimized for the racetrack, not quarter mile runs. Of course, it’ll still rocket to 60 mph (97 kph) in under 3 seconds, while 186 mph (300 kph) takes just 21.4 seconds.

With 1,050 hp at its disposal, the Lambo eventually managed to catch up to that 911 Turbo S, even though it didn’t get off to a great start (a lot of wheelspin). If you look close though, you’ll see the Huracan cross the finish line first, edging out Stuttgart’s finest.

As for the rest of the clip, it shows the likes of the BMW M4, Audi RS3 and some AMG-powered Mercs getting their behinds handed to them by the tuned Italian exotic. 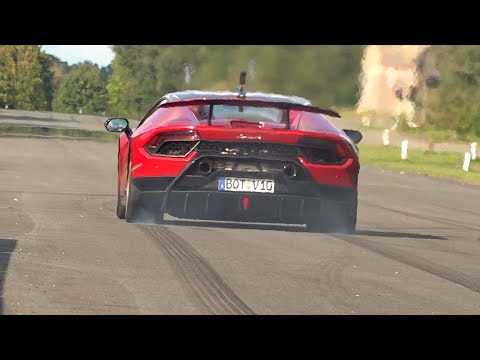