5 Which Slow Toyota 4x4 Is the Quickest? Pointless Drag Race You'll Want to Watch
Up Next

Vlad Mitrache
Buying an exotic supercar is not easy. Apart from conjuring up the money, you also have countless other things you need to consider because unless you live in the Middle East and have an oilfield for your backyard, it's unlikely you're going to buy another right away if you don't get it right.
8 photos

Besides, don't think the resale value isn't a thing here as well. Except when it comes to exotics, an astute buyer won't think about getting a car whose value will drop the least, but the one whose value will rise the most. Indeed, a rare, special edition or one that rises to legendary status for one reason or another can actually make you money. And there we are, thinking about how we'll keep the old Ford one more year because its value is already low enough that 365 more days won't make much of a difference. Yup, life's not fair.

Anyway, the situation that brought up the short rant you just read is the conundrum Brooks Weisblat had to deal with when he decided to sell his Huracan and, as you would do, buy a new one. The owner of the DragTimes website and YouTube channel was faced with a tough choice between the Lamborghini Huracan Performanté and the EVO, with the latter eventually ending up sitting in his garage.

Considering his trade, Brooks probably made the right choice as the Performanté is primarily designed for track use. That means it's lighter - a useful trait to have in drag racing as well - but also has a massive wing on its back, hampering its high-speed drag coefficient. It is built for optimal cornering grip, and the last time we checked, drag strips were as straight as they come. Powertrain-wise, the two cars are absolutely identical.

About one year ago, Brooks went for the Huracan EVO, and even though he says its updated interior (the Performanté ended production in 2019, so it came with the older version) played a part in his decision, he must have wondered all this time whether he made the right choice where it mattered the most: getting the quicker car.

With that in mind, he must have been quite happy to see a yellow Performanté show up at the drag strip right as he was pulling in his red EVO since that meant he was going to put his doubts to rest once and for all. Except it's never that easy.

Not knowing he was going to run into the Performanté, Brooks fitted the Toyo R888R tires on his EVO with the intent to set a new personal record for the Italian model. The Performanté, on the other hand, had the stock tires, and even though they're both all-wheel-drive vehicles, that extra grip could prove important enough to give us a skewed view on the actual gap between these two. Check out the video below for three of the eight races these two cars went head-to-head in. 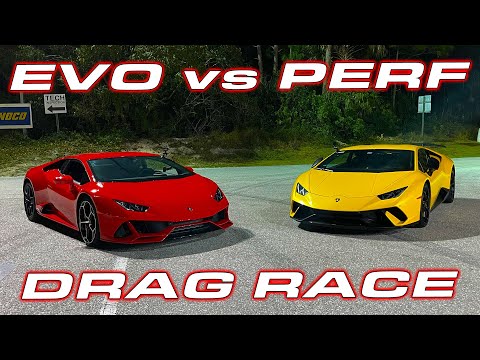